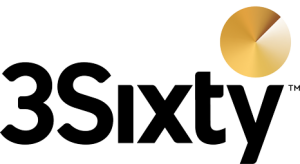 Before a crowd of top industry dignitaries from around the globe, DFASS Group unveiled a major rebranding of its corporate identity on Wednesday night in Miami, and revealed how it will evolve to take advantage of the current business environment and increase its global reach in the future.

After 31 years at the head of the well-known Duty Free Air and Ship Supply, company founder Bernard (‘Benny’) Klepach, along with Vice Chairman Roberto Graziani, announced a new corporate identity and mission statement as they renamed the company 3Sixty with a tagline that promises “Duty Free and More.”

The company has come a very long way since Klepach started with a single airline duty free account in 1987. DFASS was currently ranked the 18th-biggest travel retailer in 2017, according to The Moodie Davitt Report’s annual Top 25 ranking. In the past few weeks alone, the company revealed two important developments:  it was awarded the duty free and duty paid concession the Pittsburgh International Airport, and announced that it had bought out the shares of its joint venture partners at the TRG group so that it was the sole operator at its award-winning duty free store at Dallas Fort Worth International Airport.

“This is the single biggest significant change we’ve had in the business,” Klepach told The Moodie Davitt Report, during an extensive interview at 3Sixty headquarters just before the launch.

During the big reveal on Wednesday night, which took place at the historic Alfred I. Dupont Building in Downtown Miami, Kian Gould, Founder & CEO of digital media and e-commerce specialist AOE, a key partner of 3Sixty, briefly spoke about the fundamental shift happening in travel retail that led to the new development. 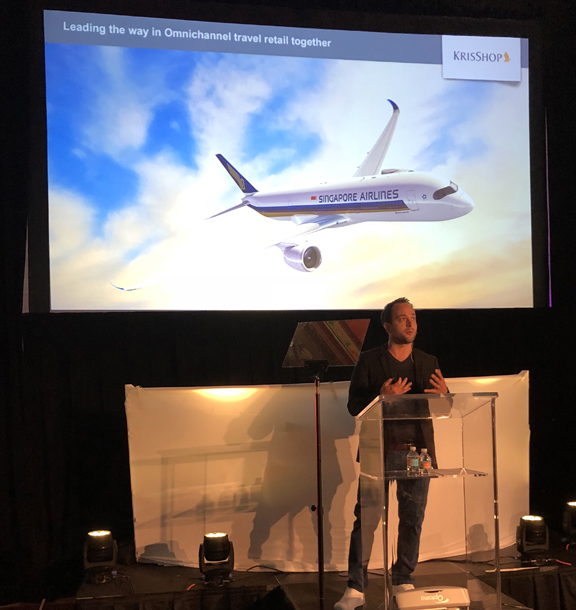 AOE works with the company at Singapore Airlines, and Gould explained how crucial the internet, omni-channel, and e-commerce are for the travel business now (75% of all sales in China are currently made by mobile devices, he said). Gould pointed out, however, that while travel retail sales are rising, it is due to greater numbers of people traveling. The reality is that sales per passenger are falling. But the online potential is huge, he says, and this is the potential the company will be working to tap into.

“81% of all purchases are pre-meditated and researched before the traveler gets to the airport,” he said, adding that 3Sixty will be re-inventing the shopping experience on Singapore Airlines using omni-channel. Going forward, e-commerce will be a big part of the company business.

Speaking next, Benny Klepach noted that being an industry innovator and visionary has always been in the company’s DNA, particularly inflight, since the company was formed in 1987.

“31 years later we now have over 600 employees and counting. We service over 400 million passengers annually. We operate across five continents with ground stores across the US, Mexico, Central & South America and the Caribbean. We now have a global network of over 120 packing and fulfilment stations.

“We are the world’s largest specialist inflight retailer, overseeing more than 30 inflight duty free concessions. With industry recognition of our successes, including Best Inflight Retailer five years in a row among many other awards, we’re in great shape.

“Duty free is in the next generation change and we are now at a crossing point and I have two options. One, to keep the company as it is and try to compete to the best of our possibilities, or two, move up a gear, developing faster, to make us an industry leader.

“Our goal is certainly not to be the biggest but to be the best, creating value for all our partners, consumers and the company.” 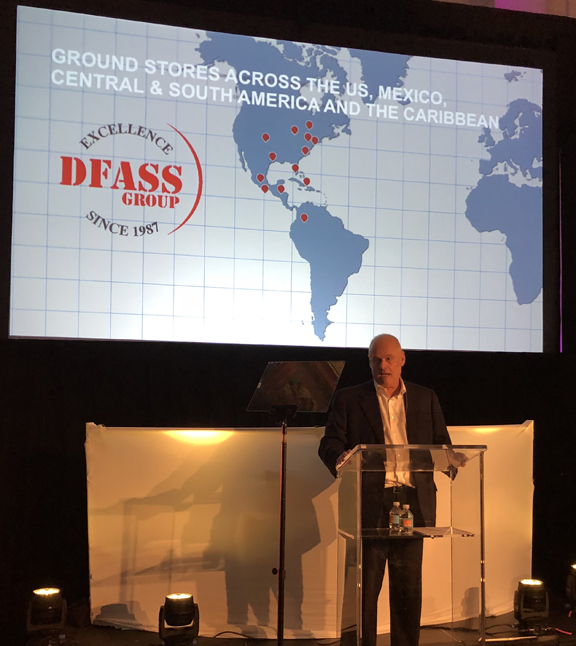 DFASS Chairman and company founder Bernard (‘Benny’) Klepach presented background on how the company has evolved over the past 31 years.

Over the years, Klepach has put together a respected executive team, now led by Executive Vice Chairman Roberto Graziani, who joined DFASS from industry-leading roles at The Nuance Group and Shilla Duty Free. After introducing the DFASS management team, Graziani explained the process that went into understanding how the company was perceived, both internally and externally, and “to better leverage our strengths, improve our weaknesses and eventually modify our business culture to be more consistent with our current size and the role our company is now playing in the travel retail industry.”

The process led the company to create a new strategy for its brand and its DNA, with a new vision, mission and proposition statements as well as new brand values for the company, said Graziani.

The new Vision for the company is ‘We climb higher, to see wider,’ which Graziani said “defines what we are doing and why we are doing it and underlines our commitment to continually look for the big picture in our industry to share a new perspective on travel retail with our partners.”

The company’s mission statement calls for it to “increase the number of touch points for the brand through investing in technology and marketing in order to offer relevant and personalized products and services.”

The brand proposition is “a constant desire to evolve and transform travel retail together with our partners, through disruption and improvement.

“Our brand values inform how the company and our team of employees – all of us – shall behave, not just internally, but also with our partners and the traveling customer,” said Graziani, who listed the values as:

3) We Care About Our People: 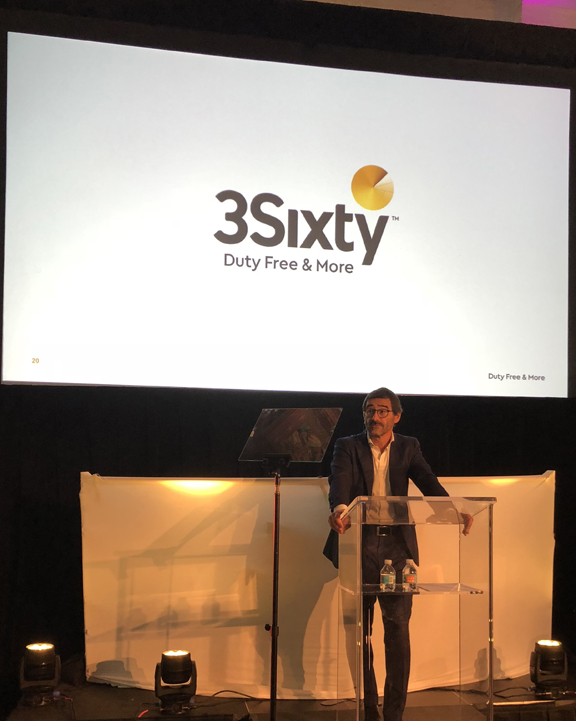 Executive Vice Chairman Roberto Graziani at the moment of the unveiling of the 3Sixty Duty Free & More rebranding for the former DFASS.

It became clear that the name DFASS (Duty Free Air and Ship Supply) was no longer as relevant in the marketplace the company operates in, said Graziani, as he revealed the new 3Sixty name and logo.

Graziani said that the name sets the company apart from its competitors, and suggests the full spectrum– 360 degrees covers the whole globe.

UK design firm Designhouse was commissioned to rebrand DFASS so that the company’s name and visual identity reflected its role as a disruptor and innovator in the travel retail sector, without restricting growth into other fields.

The result is the 3 in numeric form and the Sixty in letters, which is “more disruptive, more distinct, more memorable,” Graziani explained.

The tag line ‘Duty Free and more’ keeps it open-ended allowing the company to operate in other areas as well.

Klepach summed up the rebranding: “3Sixty Duty Free and More makes us much more relevant for the industry of today and even more importantly, for the one of tomorrow.” 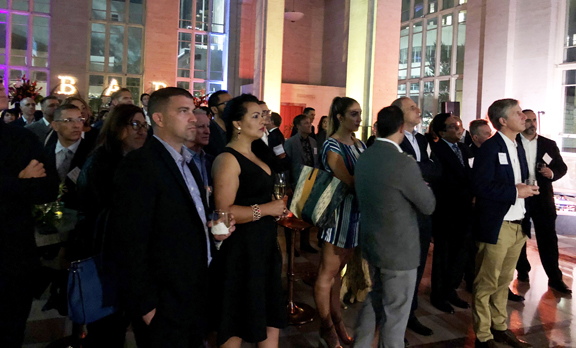 A rapt audience of top travel retail industry officials attended the unveiling of the new DFASS rebrand to 3Sixty Duty Free and More.