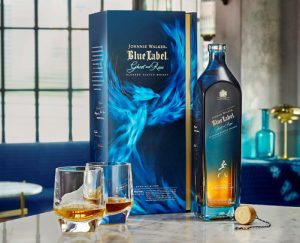 Anna MacDonald, Diageo Global Travel’s Marketing and Innovation Director, said: “With the introduction of Johnnie Walker Blue Label Ghost and Rare Glenury Royal, globe-trotting single malt fans will have a fleeting opportunity to take home a rare and indulgent Scotch that explores the depth of character of whiskies from now-silent distilleries.

“Retailers will have the opportunity to hero this limited edition Scotch with bespoke in-store activations including illuminated glorifiers and FSDUs, and to tell its rich story through dynamic wall bay takeovers.”

At the heart of Johnnie Walker Blue Label Ghost and Rare Glenury Royal whisky is the Highland single malt Glenury Royal, from the “ghost” distillery of the same name that shut its doors in 1985.  Johnnie Walker Master Blender Jim Beveridge and his team also hand-selected two rare whiskies from the “ghost” distilleries of Cambus and Pittyvaich as well as five other rare whiskies from Glen Elgin, Inchgower, Glenlossie, Cameronbridge and Glenkinchie.

Johnnie Walker Blue Label Ghost and Rare Glenury Royal is bottled at an ABV of 43.8% and with an RRP of £300 for 1L. Each bottle in this special release is individually numbered.