Austrian crystal house Swarovski has reconfirmed that travel retail is a strategic priority for the company and has spent the last year reorganizing and strengthening its TR team across the globe, reports Claudia Heskier Schioenning, VP Travel Retail & Global Accounts, who assumed full operative and executive responsibility for the travel retail channel in June 2018.

Speaking with TMI in Miami recently, Heskier Schioenning said that the management board of the family-owned company took a fact-based approach to examining the business before rolling out its new structure.

“We began analyzing our travel retail business in 2017, focusing on market trends and consumer behavior. We analyzed how the travel retail markets differ geographically, between APAC, Europe and the US, and between the channels, airports versus downtown versus US versus cruise ships. Management looked at every aspect of the business and concluded it is an important growth area for Swarovski,” she said. 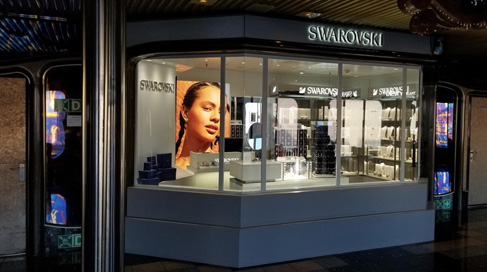 Under the new organization, Swarovski appointed three senior travel retail directors reporting to Heskier Schioenning: a director for Europe, a director for APAC and a director for US, Canada, and LATAM (Paul Collica). The directors are responsible for all aspects of the sales, planning and merchandising.

In the Americas, Collica has recruited four higher level district managers covering the West Coast, the Southeast, LATAM and Key Accounts. (The Caribbean is handled out of the US domestic division).

As the market leader with more than 10,000 points of sale world-wide, Heskier Schioenning says that it is imperative that the image in the POS in travel retail matches that of the stores in the domestic market.

“We are now much more critical about where we expand and put our footprint,” she explains. “We must be assured that we have the space and position to present a consistent image wherever we are.”

In fact, the company is unveiling a new store concept in Milan this year, which will roll out to travel retail first next April in Paris.

Insights and a higher profile

With the last of the new recruitment underway, Swarovski is now gathering insights to grow the category in travel retail. It is also expanding its profile in the channel. In the Americas, the company has just launched its first airport ad buys at JFK, Washington Dulles and Atlanta airports in partnership with DFA, and is testing a wrap in Seattle. 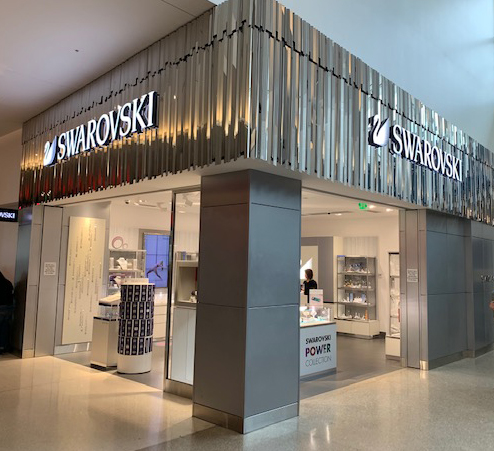 “We want to give the consumer enhanced choices,” said Heskier Schioenning.

“We are the brand that has brought sparkle to people’s every-day life since 1895. We transform light to delight and we have done that since 1895, so this is the core of our brand experience.

“Swarovski is so visible today. One million Swarovski crystals illuminated Elton John’s extravagant costumes in the Rocketman film, and JLo’s ‘It’s my Party’ tour features our completely new technology where the crystal glows at night (even the piano is blanketed in bling),” she says.

As for Travel Retail in North America, Heskier Schioenning says that Swarovski wants to partner with its Operators to create a more Sparkling World and turn light into delight.

“We will challenge ourselves and partners to think out of the box to take Swarovski to the next level.  Pop up locations, Sparkling Shop in Shops and events/activations to engage our consumer. After all we are the #1 fashion jewelry brand in the world…”

Earlier this year, Swarovski mounted very successful pop-ups in Abu Dhabi, Taiwan, Macau and in Haitang Bay in China, featuring a sunshine-inspired Spring/Summer 2019 collection designed to explore the interplay of light and crystal.

“We have different projects and we are developing that concept for fall/winter now that will be even more amplified,” she said.