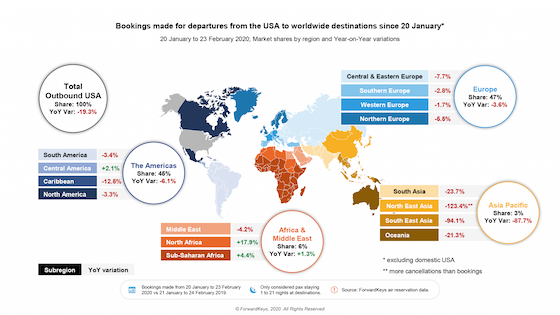 The travel setback caused by the coronavirus outbreak has now hit the United States, which is the world’s second largest outbound travel market after China.

The setback in outbound bookings from the U.S. during that time has affected other parts of the world too.

In the past five weeks bookings from the U.S. in all but three of 15 regional destinations fell. The exceptions were North Africa, Sub Saharan Africa and Central America, where bookings rose by 17.9%, 4.4% and 2.1% respectively.

ForwardKeys comments: “While the trend of the past five weeks is not encouraging, the outlook for the coming months, judging by the current state of bookings for March, April and May, is perhaps not as bad as might have been feared because a large proportion of long-haul bookings are made several months in advance.

“As of February 25, total outbound bookings from the USA are 8.0% behind where they were at the equivalent date last year. The majority of the lag is caused by a 37.0% slowdown in bookings to the Asia Pacific region. Forward bookings to Africa & Middle East are 3.9% ahead, to Europe are flat (0.1% ahead) and to the Americas