The Fragrance Foundation gave thousands of people around the world an early holiday gift last week with a wonderful Masterclass by the inimitable Leonard Lauder speaking with Linda G. Levy, president of the organization, in a webinar open to the industry.

The Fragrance Foundation hosted the webinar on the occasion of Leonard Lauder publishing his much-anticipated memoir, The Company I Keep: My Life in Beauty, which came out in November. 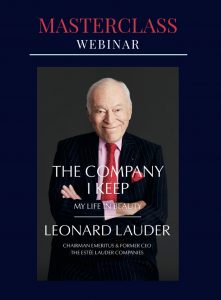 At age 87, Lauder is Chairman Emeritus and former CEO of The Estée Lauder Companies and he uses the book as a platform to share the business and life lessons he learned as well as the ad-ventures he had while helping trans-form the mom-and-pop business his mother founded in 1946 in the family kitchen into the iconic global prestige beauty company it is today.

In addition to Lauder and Levy, three key industry figures who have worked with The Estée Lauder Companies for many years—Nicolas Mirzayantz, Divisional Chief Executive Officer and Scent at International Flavors & Fragrances (IFF); Patrick Firmenich, Chairman of Firmenich; and Felix Mayr-Harting, Global Head of Fine Fragrances at Givaudan, posed questions for Leonard Lauder. Each of these companies have worked on one or more blockbuster fragrances with Lauder.

Levy also called on a number of “notables,” young fragrance executives from companies from Chanel and Parlux to Symrise, to pose some thought-provoking questions as well.

Mr. Lauder spoke at length about the history of the company – his mother would sit young Leonard in his high chair and put a chocolate kiss in his milk to entertain him while she mixed up batches of cream in her kitchen –interspersed with discussions on his “Life Lessons.” 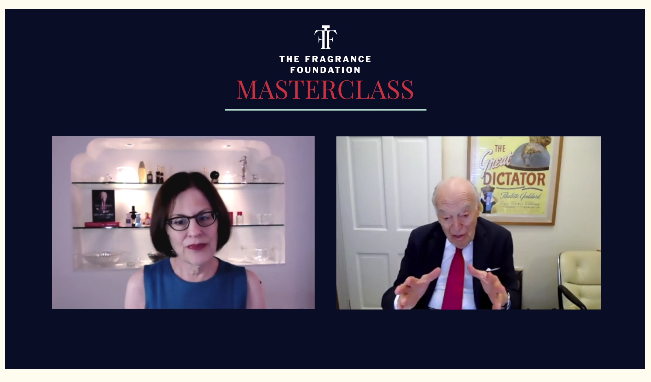 Among the highlights of this “Journey of Inspiration,” as Levy called it, Lauder stressed the importance of dedication.

“Our first 20 years were very tough,” he recalled, reminding listeners that the company was launched during the Great Depression. The Estée Lauder Company made its mark with the iconic Youth Dew, which he said was originally a derma-cream before it was a fragrance—actually a bath oil that doubled as a fragrance, so as to give clients an added value. Estée also had the foresight to not use a cellophane wrapper around the box, which allowed women to smell it.

Being able to smell the product was key to the Lauder company’s innovative sampling program, which Leonard took on when he joined the company in 1956 after a stint in the Navy.

“We couldn’t afford to advertise enough to make a difference so we took all our money and invested it in Youth Dew samples, and this is the way we sold it,” he said.

Which leads to another of Leonard Lauder’s Life Lessons: “Don’t let bean counters ruin your success!”

Estée was also successful in convincing U.S. women that fragrance was not a luxury out of their reach to be used only on special occasions and that perfume did not have to be French to be good.

She also pioneered the idea of the “fragrance wardrobe”: after Youth Dew came Aliage, a green “sport fragrance,” followed by launches of numerous other fragrances, each meeting a different need. Another Lauder icon, Beautiful, created by Leonard’s wife Evelyn, targeted brides and is still a best-seller today.

Leonard Lauder also stresses that the company story was the family story, and that the people in the company are all part of the family. “We are here for the long run,” he said.

Two other Life Lessons also propelled the success of the company: actively seeking women to join his management team and moving the company into Europe.

“Never make an important decision without a woman at the table,” he quipped. Other gems from the Master Class included “take responsibility and account-ability,” “hire people smarter than yourself,” “believe in your vision,” “if you have someone who you trust, trust them,” and “learn to listen.” Most important, he said, “tell her that you love her—people need recognition and constant reminders that they are cherished. Tell them!”

All of Leonard Lauder’s proceeds from the sale of The Company I Keep: My Life in Beauty, will be donated to charity.