It has been a little over one year since Marshall Farrer took over as Brown-Forman Managing Director Global Travel Retail from Jim Perry. In that short period of time devastating political, socioeconomic and exchange issues have impacted the entire category. Farrer sat down with Travel Market Insider’s Michael Pasternak in Brown-Forman’s Louisville offices and explained how the 140-year-old family-run spirits giant has not only weathered the storm, but is well-positioned for growth in the future.

Marshall Farrer’s first year as Brown-Forman Managing Director Global Travel Retail was filled with both challenges and opportunities. Since Marshall assumed his role on May 1, 2015, Brown-Forman has bought and sold spirits brands, dealt with chaos in the key emerging markets of Brazil and Russia, and celebrated important anniversaries.

Farrer joined Brown-Forman in 1998 and was most recently vice president, global brand director for Jack Daniel’s Tennessee Honey. He previously served as managing director of Australia/New Zealand, and director for Latin America and the Caribbean.

“I’m new to the role, but not new to the channel after seven and a half years across Latin America and Australia. It has been a great first year, very exciting and filled with lots of challenges. The biggest challenge unquestionably for us has been foreign currency exchange. The vulnerability of it was as extreme as it has been in recent years. Major emerging economies like Brazil and Russia that index highly in travel retail on our brands were significantly affected,” he told TMI.

“These are not one-year problems, but multi-year, particularly when you look at Russia, and Brazil with the chaos down there at the moment. If they can get their act together it would be great, because the Brazilians are really important in the Americas especially.”

Farrer says what surprised him the most is the breadth of international passengers that come through travel retail and the fluidity of where they travel to and from.

“Depending on what macroeconomic, sociopolitical or other factors driving it, we see the passenger nationalities shifting their preference points. That’s exciting because it opens up lots of new opportunities.

While the changing consumer affects sales, Farrer says Brown-Forman is able to look at the bigger picture beyond just travel retail.

“We like to take a long-term approach. Being a family business with a long-term perspective, we can endure the bumps and bruises along the way a lot better than other companies which are really beholden to quarter results. We understand that there are going to be challenges, yet our brands can still be built very strongly during this period.” 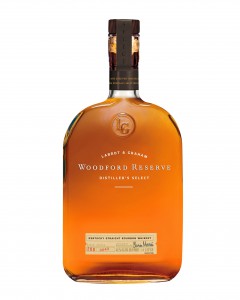 In the past few months Brown-Forman sold its liqueur brands Southern Comfort and Tuaca and purchased single malt scotches The GlenDronach, BenRiach, and Glenglassaugh. Along with its purchase of the Slane Distillery in Ireland, these moves have made Brown-Forman’s spirits portfolio more premium, says Farrer.

“If you look at the history of Brown-Forman’s portfolio over the years, there has been this long-term trend towards premiumization. We used to be a very U.S.-focused portfolio and we had agency brands in the U.S. We really shifted to owning our own brands with long-term premiumization. More recently that meant the sale of Southern Comfort and Tuaca, which are standard-priced liqueurs in not as fast growth segments. Coincidentally, we ended up with three fantastic, very premium single malt brands and an exciting, longer-term Irish Whiskey project, which is quite premium.

“The moves certainly speak to our strategy to be stronger in whiskey. We are leaders in American Whiskey. We are going to drive that and we think we can bring a lot of growth to the industry by being successful in that area. We also think this expertise allows us to participate in other exciting categories of whiskey, and there are hardly any categories more exciting than single malts and premium Irish Whiskey.”

The new scotches from The BenRiach Distillery are known by Scotch enthusiasts who are looking to buy beyond the well-known brands, says Farrer.

“In our early learnings about the brands, I would say that true single malt enthusiasts are well aware of these brands. And that is really where we hope we will find success. They are highly acclaimed whiskies and there is clear demand. Our ambitions are not to go knock heads with the three or four biggest single malts in the category, it is to offer a complement in that category, offer excitement and exploration.”

With the upcoming opening of its Slane Distillery Brown-Forman is gaining entry into the booming Irish Whiskey category.

“The category is not crowded. There are very strong competitors, but there is room for a number of other brands to come in and find their own space and add value to the category. We’ve got an incredible distillery site with unbelievable history and authenticity. Travel retail will be part of the roll out.”

Even as Brown-Forman is moving into Scotch and Irish Whiskey, American Whiskey is still the company’s number one focus.

“Our commitment is to lead American Whiskey and to make it a major growth contributor for travel retail. You will see more and more focus on American Whiskey going forward and we will bring some exciting concepts,” he says.

“We think we have done an outstanding job developing the American Whiskey category in travel retail. It previously didn’t exist. It was a fringe category with tertiary visibility and we brought it to the forefront.”

This fiscal year the company will introduce Cooper’s Craft, its first new bourbon in 20 years, which celebrates the company’s 70-plus years of barrel-making and wood expertise.

“With Cooper’s Craft we saw an opportunity where we can better connect with the bourbon consumers. We have this incredible asset with the Brown-Forman Cooperage. We are the only distillery worldwide that makes its own barrels, and that is about 70% of the flavor that goes into bourbon. We think the story of coopering barrels and what that does to the whiskey is very relevant to the millennial consumer. We will slowly be introducing Cooper’s Craft into travel retail. We want to find the right pockets and find the right way to communicate it effectively and build it up in the U.S.”

Brown-Forman has also been putting more emphasis behind its founding brand Old Forester.

“Old Forester is the only bourbon that was produced before, during, and after prohibition. It’s Louisville’s bourbon. We’ve introduced Old Forester into some European airports this past year and had some great success. It’s had some distribution in the U.S., but it wasn’t something we had prioritized. But with our new distillery opening in 2017, there is going to be a lot of interest in this product.

“Bartenders tell us there is huge category excitement in bourbon but when people are looking for authentic historical brands Old Forester becomes the beacon they point people to. We’ve got a great story to tell in travel retail.”

Brown-Forman’s number one and most important brand is still Jack Daniel’s. According to The IWSR, it remains the number two brand in Americas travel retail, and the number three brand in travel retail globally. 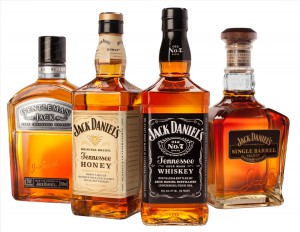 Even with this success, Farrer says Jack Daniel’s is still a relatively new brand internationally and has only lightly penetrated emerging markets.

“Twenty years ago I think about 86% of Jack Daniel’s sales came from the U.S. Now that number is about 44%. We think we have tremendous upside to grow. We’re putting a renewed emphasis behind Old No. 7. With some of the economic challenges that are out there we have retailers coming back telling us ‘We’ve been on a real strong super premium strategy, we actually think we need to reinitiate with you on Old No. 7. That has a better chance of bringing in more footfall to our stores.’”

Brown-Forman has expanded the Jack Daniel’s portfolio with exciting new entries like Sinatra Select and No. 27 Tennessee Gold.

“The Sinatra Select played a great role in introducing Jack Daniel’s into the ultra premium segments, garnering excitement and collectability. And now we have Gold that we have been rolling out, which is doing really well in many parts of the world.

“We’ve just been rolling out Jack Daniel’s Tennessee Fire, which is having real early success. The initial feedback and data from Australia to Germany and U.S. Travel Retail has been encouraging.”

In another exciting development, Brown-Forman is celebrating the 150th anniversary of Jack Daniel’s Distillery this year with partnerships with travel retailers around the world.

“We have a number of retailers that are supporting the 150th anniversary. DFS really jumped on the concept from the outset and are putting on a year-long program allowing us to promote and support the brand.” 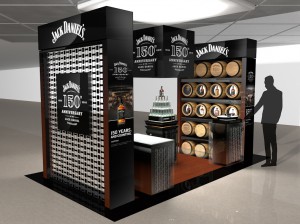 Brown-Forman is also celebrating the anniversary by placing 150 barrels worldwide filled with prizes that consumers will be able to locate by following a series of clues.

“It is very much like a treasure hunt,” says Farrer. “We have placed barrels in several airports around the world. The ultimate prize is winning a trip to the distillery for a 150th anniversary celebration.”

This year Brown-Forman is also celebrating the 70th year of barrel-making at the Brown-Forman Cooperage in Louisville as well as the 20th birthday of the Woodford Reserve Distillery.

Still a Brown in Brown-Forman

More than 145 years after it was founded, there are still many Brown family members in various levels of leadership at Brown-Forman.

“The family has a deep emotion and care about the company and its impact on the community.

“We’ve found from our partners that us being a family company provides a sense of continuity among ownership and management, and gives them tremendous comfort when they need to come to us about opportunities or problems. We are not a faceless corporation. We are a family-backed business.”

The family aspect also helps in global travel retail, where many operations are family-run.

“When I am able to sit down with the heads of those companies, often times those meetings include two generations in those families. I think we have different conversations than they have with other suppliers. Those conversations span history and talk about partnership, and trust. We think it is a tremendous asset.”

It has only been a few years since Brown-Forman has treated global travel retail as a true standalone region, and Farrer says there are more growth opportunities as the company gets more serious about the channel.

“There will be more channel exclusives, which we find is a motivator to purchase. You’ll see us looking to deliver more experiences inside travel retail stores. You are going to see more of an emphasis on visibility for our key brands Jack Daniel’s and Woodford Reserve.

“Global Travel Retail in Brown-Forman has more attention and focus behind it than it probably ever has had. I think for the first time our brand teams are looking at using the channel to introduce brands, to generate demand and awareness, and help lead local economies as opposed to the other way around.”

Even with the issues negatively impacting global travel retail, Farrer is optimistic about the channel.

“Last year global travel retail contracted. You have to have the fortitude to endure challenging years. You can look historically at the channel and one year of contraction is always followed by sustained years of growth.”