Rouge Duty Free held a grand opening for its first store in St. Croix in March.

With the opening of its new stores in St. Croix, family-owned Rouge Duty Free now operates a dozen properties in the Caribbean – in St. Thomas, Grenada, Grand Cayman and St. Croix — reaching this milestone sooner than expected since it first started in the region in 2015.

“Our goal in the next three-five years is to be at 30 Rouge Duty Free stores,” says Raymond Kattoura, whose company Duty Free & Travel Retail Group Inc. helps manage the business for Rouge Duty Free. Kattoura works with Marco Bordoni, who heads up the Caribbean and North American business for his family’s Buenos Aires-based Perfumerias Rouge.

Kattoura tells TMI that Rouge is well on its way to reach this ambitious goal, as it has several new properties opening soon, as well as several others that will be announced next year.

“These are solid investments. We are not gambling,” he says. “We study the market, see a need, and we invest. I know the Caribbean well, with its ups and downs; we are used to these challenges. It’s nothing new. We had terrible hurricanes in the 80s and 90s, and later, and the region always bounces back in a year or so. The islands come back stronger, and the same with the cruise industry. COVID was different, but we will come back.”

Kattoura admits that the Rouge stores were not affected as badly by the pandemic as many other island retailers.

“Except for our Grenada airport stores, which were closed for a short period of time, our local business grew. Since we focus a lot on the local customers, we saw an increase in traffic. Our walk-in customers more than tripled. We think this was because so many people were working from home, they discovered us. When they were at their 9-5 jobs, they didn’t have a chance to see our stores. This was the segment that we gained and I think that it made a big difference.”

Further helping the Rouge business, he says that due to the travel restrictions in place, many local residents were spending their money at local stores, doing much more local shopping.

“This was a surprise for us, but it shouldn’t have been because our Rouge stores have always focused as much on locals as on tourists. And we do it very well, I think,” he explained. “Since the tourists were missing during COVID, we were compensated very well from the local populations.”

“We cater to duty free and local, and the local segment of the Caribbean market has purchasing power,” he notes. 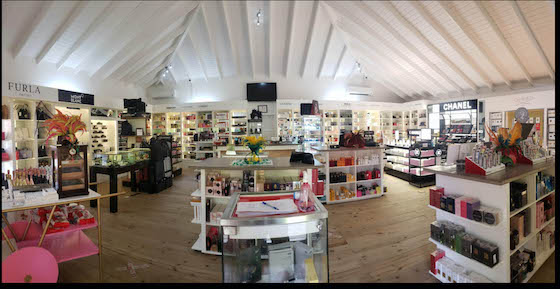 The Rouge Duty Free flagship shop at the Port Louis Marina in Grenada.

Rouge opened its first St. Croix store in Christiansted in Orange Grove Plaza. The luxury shop had a soft opening last December, followed by a gala “red-carpet” inauguration at the end of March. The store has the largest fragrance and skin care assortment on the island, along with a luxurious MontBlanc corner boutique, and a Furla handbags leather corner as well. It also houses a spa cabin for exclusive skincare brands Valmont and Cellcosmet.

“From day one of the soft opening this store has been a huge success. We were so encouraged by this success that when we heard of an opportunity to open another location in the heart of Christiansted’s downtown Historic District, we grabbed it,” he said.

Located on the city’s famed Company Street in the former Sandal’s mansion, the company is taking the Spanish-style historic site and renovating it into a Rouge Maison concept.

“This is something St. Croix will be able to use for tourism as well as for locals. We are converting the large backyard into a very nice, hip, café, serving light food, coffee, wines. Upstairs on the second level will be a small boutique hotel – with four really beautiful suites. And behind the backyard, Rouge is opening a big Spa, not just a cabin.

“In the boutique, the design will be similar to a Galleria, with fragrances on the right and skincare on the left, and specialized niches dedicated to select high-end brands around the store. These will feature some of the most luxurious names in beauty, as well as fashion, sunglasses, luggage and liquor,” said Kattoura.

As a historic site, the house needs special restoration. The main floor has now been finished and Kattoura expects to begin installing fixtures and furniture shortly.

“We are looking at a partial opening for the fragrance area in December or January, with a Grand Opening maybe in March,” he tells TMI. More work still needs to be done in the back, where an old Dutch oven needs to be restored, for example, using saved tiles and bricks.

“This Dutch oven will become the main bar of our café. We envision the cafe becoming a popular place to have a nice breakfast, lunch or snack for both tourists and local Cruzans,” said Kattoura, who is very optimistic about the potential for the site.

“Our first store in St. Croix now ranks as Rouge Duty Free’s #2 or #3 location, delivering numbers we haven’t seen on the island since the 1980s,” he reports. 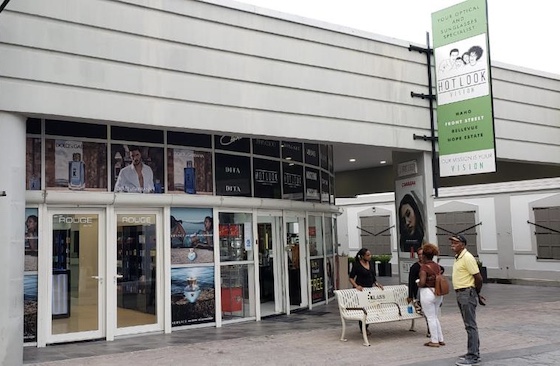 Kattoura is even more excited about Rouge’s expansion into Dutch St. Maarten, where the company will be opening three stores this month, thus reaching 12 stores in the Caribbean. Two of the locations belong to the cruise port in Philipsburg. One shop is on the pier where the tenders from the cruise ships come in: “This store captures a lot of the cruise passenger traffic. It will be the first and last store that cruise passengers see,” he noted.

The second port shop is on the other side at Bobby’s marina, home of the Ferry to St. Bart and boats for the cruise excursions. It is like a little village with restaurants and shops.

“These two stores are heavy cruise business and very heavily trafficked,” he says. “Cruising recently restarted in St. Maarten and the Port Authority expects it to reach more normal levels by November.”

The third St. Maarten store is a high-end fragrance boutique in the center of Front Street. “This store is very elegant. It is next to a Michael Kors boutique, and Hot Looks, facing Longchamp and Ralph Lauren Boutiques. It is really in the center of action.”

More openings on the horizon 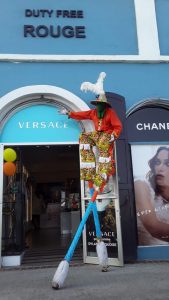 “I think that Rouge may be one of the only companies opening new stores now, but it is something that is encouraging for everybody. Plus, we are opening as an independent family-owned retailer, and our stores are really beautiful.

“We have eight stores open and operational now and all of these are profitable. We picked fantastic locations, and I am sure St. Maarten will be the same,” he noted.

The Rouge expansion is far from finished. The company will be adding as many as eight more stores on three major islands to its portfolio in 2022 and 2023

It will also be expanding further in Grenada. Rouge is looking to add more doors in Port Louis, where its flagship there has grown out of its current space.

The company is also extending its product portfolio. After introducing liquor in its Grenada operations and will add it in St. Croix, Kattoura says that all future openings will carry wine and spirits.

“Liquor will be a focus for us this year. We are opening a new division, and in Grenada we are expanding into liquor distribution for hotels and restaurants.”

“We are going to be a major player in this market, but are working hard to keep the unique feel of family-owned Caribbean duty free traditions,” he promises.