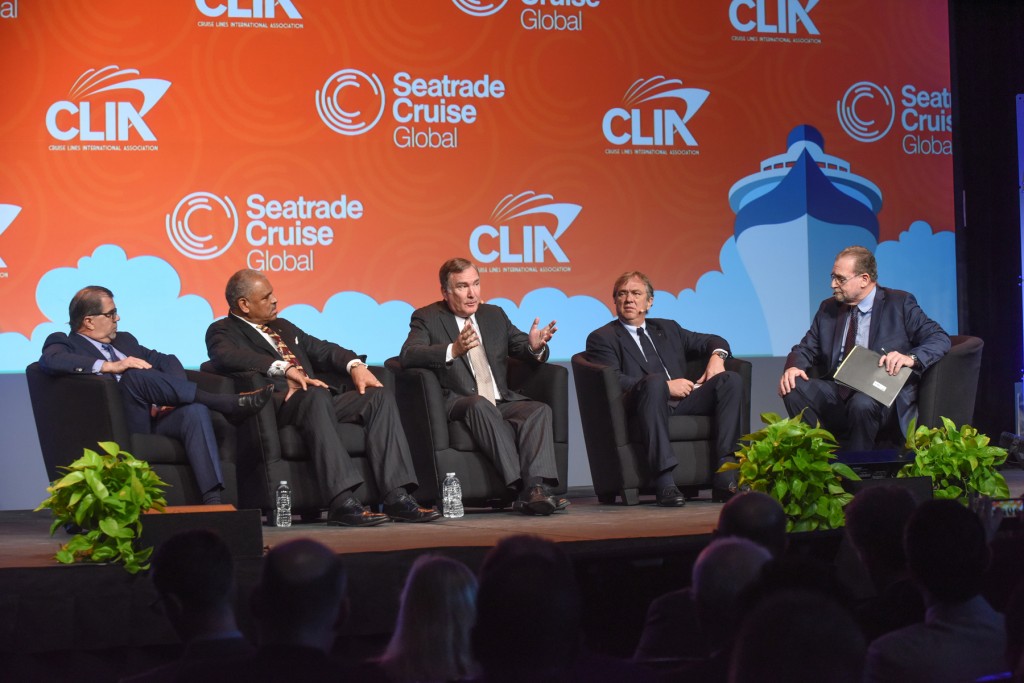 The 2016 Seatrade Cruise Global event – the largest conference and trade show in the international cruise industry, hosting more than 800 exhibitors and 11,000 attendees –opened March 14 with its traditional State of the Global Industry presented by a panel of the cruise world’s top executives discussing innovation.

Innovation—and how creativity fuels the future of on-board experiences and yields—was the theme of the opening morning conferences, held in the packed Terminal 4 at the Port Everglades Cruise Pier adjacent to the Fort Lauderdale Broward County Convention Center on March 14-17.

The cruise industry is the fastest-growing category in the leisure travel market, and has experienced an average annual passenger growth rate of approximately 7% per annum since 1980. In 2015 global cruise industry trade association CLIA –the Cruise Lines International Association, and the regional organization Florida-Caribbean Cruise Association FCCA, reported that an estimated 23 million passengers took a cruise. This was up 4% over 2014’s record breaking 22.04 million, and this year cruising is poised to reach new heights, say the organizations, which are forecasting 24 million will sail on FCCA or CLIA member lines in 2016, and spend an average of $135 per passenger per day.

Demand for cruising has increased 68% in the last 10 years, says CLIA. But with 1.2 billion people forecast to travel for leisure in all categories this year, conference moderator Peter Greenberg points out that cruising still represents a small proportion of the total, so much potential still exists.

North America has been the traditional home of global cruising— 12.01 million of 2014’s 22 million were sourced from North America and more than a third –33.7% –of 2016’s deployed capacity will be in Caribbean/Bahamas waters – but the cruise industry is promising that passengers in 2016 “will have the world as their gangway.” 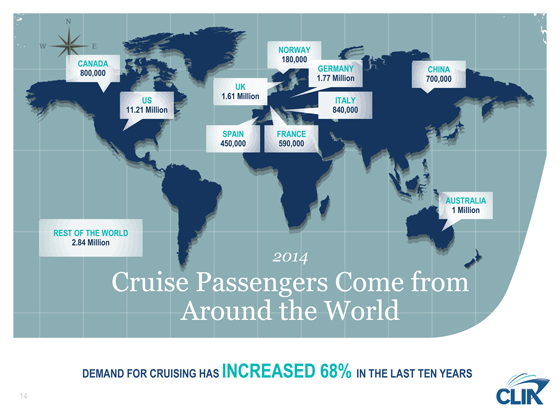 Tourists the world over are discovering cruising. CLIA says that 700,000 Chinese vacationers will take a cruise this year, along with one million Australians. In addition to the ships being deployed to the Caribbean (which percentage-wise is trending downward), CLIA is forecasting that Europe will account for another 30% of deployed capacity – with 18.7% going to Mediterranean cruises , and 11.7% to the rest of Europe. Asia will account for 9.2% of deployment this year and Australia/New Zealand/S. Pacific for 6.1%. In the Americas outside of the Caribbean, Alaska cruises generate 4.1% of global cruise capacity and South America 2.7%, with Other Markets rounding out the final 14%.

Nine new ocean-going vessels with 23,000 berths and representing an investment of more than $5.5 billion are launching this year. They can visit nearly 1,000 ports around the globe, with many new ports opening in Asia and Australia. In fact, China was a major focus of the 2016 Seatrade Global event, as was Cuba. But the Caribbean continues to “headline the industry’s success,” says the FCCA, both in numbers and yields.

The cruise industry is ensuring that access to Caribbean cruises is easy and convenient, and reaches as many potential guests as possible. North America currently has 30 embarkation ports, which puts a port within driving distance of 75% of North American vacationers. 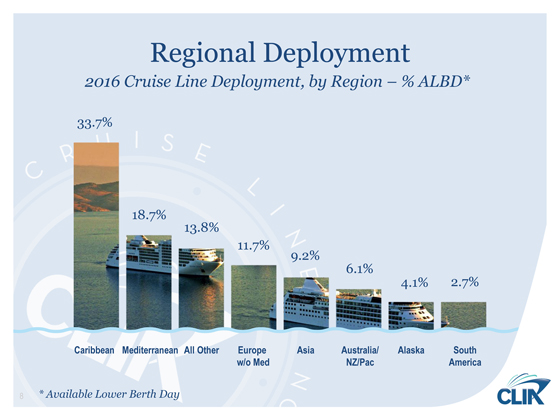 Opening homeports through a broad geographic area is just one innovation that has helped the cruise industry grow, and the industry leaders see a bright future ahead, one that does not depend on the size of the ships or the cruise line.

Fain denies that RCC, known for such innovations as adding Rock climbing walls to its new ships and creating a real Central Park on its Oasis of the Seas, is trying to make its ships the destination. “Our ships are still a way to go to other destinations,” he insists, “but we want to make the experience of getting there wonderful.”

The goal, he said, was to create an entire cruise of “small wonders.”

“It is all about the experience,” stressed Arnold Donald, president and ceo, Carnival Corp. & plc. “We must exceed expectations and create that transformative guest experience.”

MSC, which plans to introduce seven new ships by 2022, is targeting North America for major expansion. Vago cited the line’s new ‘follow the sun” concept debuting on its MSC Seaside, which will cruise year-round from PortMiami starting in December 2017. The ship will feature a 360-degree, ocean-level promenade with indoor/outdoor shops and restaurants, buffet area and pool, along with a two-deck glass-walled atrium and panoramic exterior elevators.

Norwegian Cruise Line President & CEO Frank Del Rio said that innovation comes from understanding your customer, but at the same time innovation must deliver a return on investment and pay its way. He spoke about the popularity of the single cabins NCL introduced, but said he has no plans to increase the percentage because they do not deliver enough return.

Del Rio also questioned the need to increase the rate of new ship builds. “Our older, smaller ships actually generate the most revenues,” he said.

“We need a more balanced approach of new ship builds. We need to maintain the highest quality possible for our existing ships,” he said.

“To innovate is to think outside the box. It’s how you convert thinking into the experience,” said Donald.

Meanwhile, Carnival Corp. has introduced its innovative new Fathom brand, a pioneer in ‘social impact” cruising, where its passengers have the opportunity to work alongside locals on community needs. Fathom will take its first voyage in April to the Dominican Republic and was just received approval from Cuba on March 21 to cruise to Cuba beginning May 1, 2016. Fathom will sail on the MV Adonia, a 704-passenger vessel redeployed from Carnival Corporation’s P&O Cruises (UK).

Regarding China, with its 135 million outbound tourists, of which cruising captures only a tiny percentage, the panelists all agreed that the potential is vast but that you cannot grow faster than new ships can be built.

On the other hand, the cruise industry has the unique ability to reposition assets.

Cuba is another story though. Although the U.S. cruise companies have ships in the region and are waiting  for permission from the Cuban authorities to begin service, they worry that Havana’s aging infrastructure cannot handle the influx of tourists that could pour into the island.

“We are realists,” noted RCL’s Fain.

“Havana today does not have the infrastructure to take our ships,” said Del Rio.

“Cuba is very complex,” agreed MSC’s Vago, who already home ports a ship in Havana and will add a second ship, the MSC Armonia, next November. MSC began serving the island with its 2,120-guest MSC Opera last December. Vago announced that MSC plans to go year-round in Cuba.

All four panelists strongly argued that the opening of Cuba will help, not hurt, other parts of the Caribbean.

“Cuba will not divert traffic from the other islands. It will, instead, create a “halo” effect that will generate additional interest in and visits to the Caribbean,” Fain said.

“The rest of the Caribbean doesn’t have to worry, said Del Rio, “The Western Caribbean will get a jump from Cuba. It’s a slow rolling start, but remember, 5.5 million tourists visit Cuba every year, just not from the U.S.,” he said.

Rick Sasso, President & CEO of MSC Cruises (USA), addressed the topic the next day in a session dedicated to the Caribbean and Cuba.

“The Cuban government is in no hurry to make changes. We must go with the flow. It will be a slower process than people might expect. On the other hand, cruise ships will help Cuba expand its tourism by providing hotel space while the country builds its long-term capacity. The demand is there, and it will be a great opportunity for the region.”

The first morning session ended with the agreement that fear is the biggest challenge facing innovation: fear of terrorism, fear of disease like the norovirus and the current Zika virus, fear of accidents.

Carnival’s Donald agreed. “But there is always something, every year. As long as people do not panic, and have the facts, they will travel.”

“We must be honest,” added Del Rio.