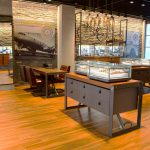 Little Switzerland, one of the most important luxury retailers in the Caribbean, is expanding its footprint in the region with several new branded boutiques for Breitling and TAG Heuer, as well as a Patek Philippe Showroom in St. Thomas. As the largest authorized retailer of luxury timepieces in the Caribbean, the company recently opened […]

One of the Caribbean’s most experienced luxury retail jewelry executives, Jack Coote, has stepped down from his position of Vice President of Operations for Little Switzerland, where he was based in St. Thomas, US Virgin Islands. His resignation took effect as of December 31, 2015. Coote had announced his decision internally back in June of […]