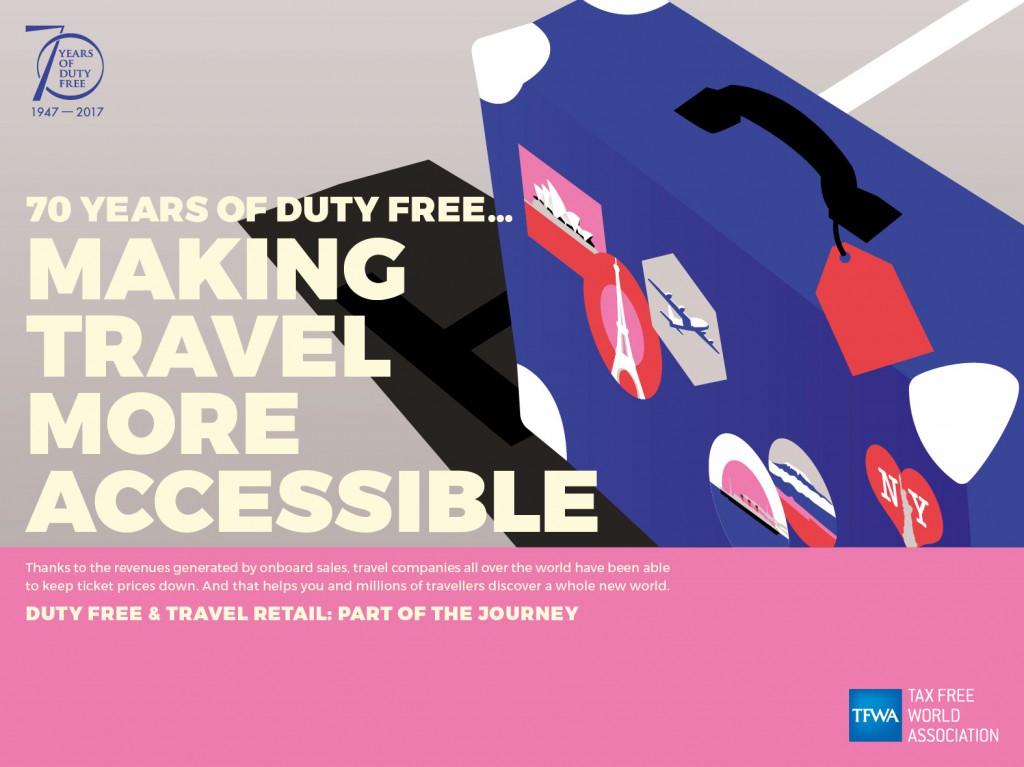 As readers of TMI may have noticed, we have begun running a series of advertisements highlighting the contributions that the travel retail industry makes to the travel industry and the wider economy.

The campaign was created by industry association TFWA to mark the 70th anniversary of the duty free industry this year.

The global campaign, which will be made available for use by business partners and stakeholders across the world, features a series of six illustrative graphical adverts based around a number of core messages.

“The 70th anniversary of our industry gives us a wonderful opportunity to tell people why duty free and travel retail matters – whether it’s at airports, on board ferries and cruise ships, at the border, downtown or during a flight,” says TFWA president Erik Juul-Mortensen. “Our industry generates excitement and pleasure as well as vital revenues, and we want to mark that through this campaign.”

The campaign, featuring the caption “Duty free & travel retail: part of the journey,” will consist of a series of distinctive adverts, each highlighting an aspect of the contribution made by duty free and travel retail to the world of travel. Some of these are practical, such as how the industry brings jobs to local communities, makes travel more accessible and paves the way for transport improvements. Others are more emotional, such as how a visit to the duty free store is part of the holiday experience, how a gift from duty free can make a homecoming even happier, and how the industry brings customers great brands at great prices.

The imagery on each advert has been designed to be culturally universal, and the series will be produced in English, French, Spanish, Chinese, Korean, Japanese and Arabic as well as other languages if required.

Airports, retailers, airlines, cruise lines, brands, trade press and other stakeholders partnering with TFWA for this venture will be invited to add their own logo to the adverts, which will be available in a range of formats. These can then be used at their own locations according to availability, in their own promotional material or as part of social media campaigns. The visuals will be made available to partners entirely free of charge.

“It’s a powerful platform for us all to come together and convey a positive message to the traveler about what our industry is all about. So far, we’ve had a really positive response from some of the leading operators in the industry, and I hope all will be united in supporting this initiative. As said before, we as an industry need to speak more often with one voice – this is a chance to do just that.”