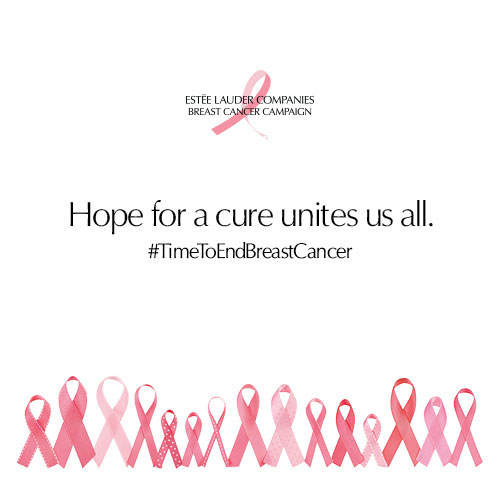 The Estée Lauder Companies launched its annual Breast Cancer Awareness Campaign on October 1, a program the company has spearheaded since 1992.

Committed to saving lives in its mission to create a breast cancer-free world, ELC has been a leader in the global breast cancer movement since Evelyn H. Lauder co-created the Pink Ribbon and started The Breast Cancer Campaign (The Campaign) in 1992.

The Campaign has raised more than $79 million to support global research, education and medical services through the collective support of consumers, employees and partners worldwide, with more than $65 million funding 260 medical research grants through BCRF. This year the Campaign aims to raise another $9 million globally.

Real impact has been made, in part as a result of the Campaign. Mortality rates from breast cancer have declined by 40% among women since the late 1980’s, according to the American Cancer Society and BCRF-funded researchers have been involved in every major breakthrough in breast cancer prevention, diagnosis, treatment and survivorship.

Breast cancer is spoken about more openly and important messages about early detection are saving lives – five-year survival rates are better than 90% with early detection.

William P. Lauder, Executive Chairman of The Estée Lauder Companies Inc., continues to honor the legacy of his late mother, stating, “The Breast Cancer Campaign is an expression of the best of what we do as a company. My mother, Evelyn Lauder, had a vision to end breast cancer when she started The Campaign in 1992.

“Since then, we have been pioneers in the breast cancer movement, driven by our passionate employees, partners and consumers around the world. I am so proud that her legacy lives on as we remain committed to making sustainable investments in research, education and medical services to bring us closer to eradicating this disease.”

The Campaign will continue to drive worldwide efforts aligned to its mission:

*Launch a new social media call to action to rally supporters around the world to participate and raise funds through the simple action of drawing a Pink Ribbon on the back of their hand using pink lipstick, sharing why it’s #TimeToEnd BreastCancer and posting a photo on Instagram also with #ELCdonates. For every public, in-feed Instagram post during the month of October featuring both #TimeTo EndBreastCancer and

*Mobilize 48,000 employees to positively impact communities and unite in action

*Drive donations to BCRF through ELCompanies.com/BreastCancerCampaign

Each will contribute by selling Pink Ribbon Products or making donations to BCRF and/or other charitable organizations around the world.

The assortment differs by country and organization.