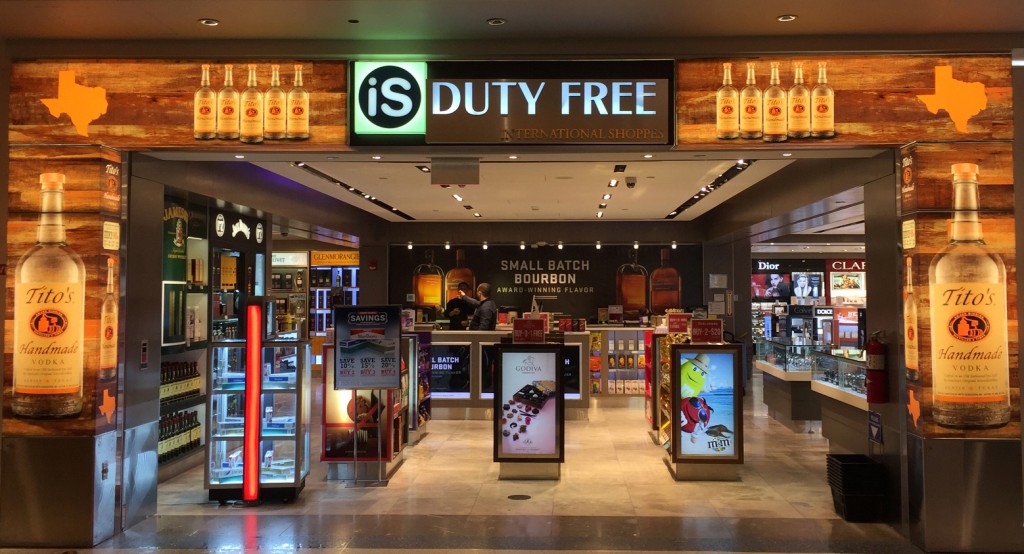 Tito’s Handmade Vodka, distributed in North America Duty Free by EWTRA, is increasing its footprint in airports and cruise lines across the region.

The retail installations feature branding across the store entrance as well as branded wall bays and gondolas, all of which highlight Tito’s origins in Austin, Texas and showcase its status as the number one original craft vodka. Shoppers are also invited to try Tito’s neat or mixed in cocktails at a branded tasting bar.

From 2017 Tito’s Handmade Vodka is available in North American Duty Free in an extended range of sizes including 1.75 liter, 375ml, alongside 1 liter bottles.

International Shoppes vice president, Scott Halpern says: “We are delighted to see one of our favorite home-grown spirits brands expand its presence in store. Tito’s Handmade Vodka is a highly sought-after American brand amongst US and foreign travelers. By making it more visible in store we will attract impulse shoppers as well as those who seek out Tito’s. Additional sizes and price points will also broaden appeal.”

Tito’s Handmade Vodka’s presence in bars & restaurants on cruise ships is also expanding. To offer guests unique craft cocktails, Tito’s is now featured on menus on board Celebrity Cruise ships and as the cocktail of the day on Carnival ships, with more programs to come.

Tito’s International Managing Director John McDonnell says: “As word spreads, more and more people are discovering Tito’s and are inspired by the story behind it. Its quality and craft credentials appeal to our core millennial shopper audience, not only attracting loyal fans to pick up a bottle but also introducing new drinkers. This high impact presence will further heighten interest in the brand.”

Copper distilled Tito’s Handmade Vodka is made from corn and is the world’s fastest growing vodka. Today the brand is sold in 100 markets around the world including the US, Canada, Europe, the Middle East and Asia.