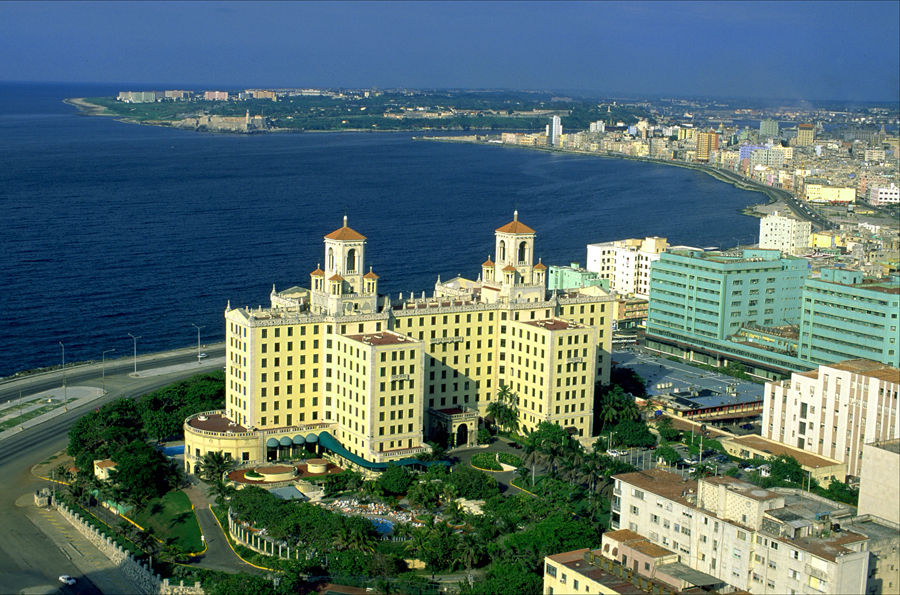 First, the good news: if you’re a U.S. citizen who’s already licensed to travel to Cuba, you may now come back to the United States with $400 worth of Cuban goods, including $100 worth of duty free rum and cigars. The bad news: it may still be awhile before the rest of us can legally visit this forbidden island only 90 miles from Florida’s shores.

On Wednesday, President Obama announced in a live TV address that he would seek to end half a century of U.S. hostility toward Cuba. That declaration — which includes the establishment of full diplomatic relations with the Castro regime — followed the long-sought release of jailed U.S. contractor Alan Gross from a Cuban prison, as well as the return of three convicted Cuban spies back to the island.

Yesterday morning, as shipping executive Jay Brickman was leaving for Miami International Airport for his 50-minute charter flight to Havana, he had no clue the earth was about to shake under his feet.
But by the time Brickman had boarded his plane, the whole world knew.
“I had planned this trip before, so this makes it even more productive once we’re there,” said Brickman, vice-president of Jacksonville-based Crowley Liner Services, which earlier this year became the first customer at Cuba’s nearly $1 billion mega-port at Mariel, along the island’s north coast just west of Havana.
“The reason for switching container traffic from Havana to Mariel was to make Havana a more attractive cruise ship port,” said Brickman. “If the U.S. government says it’s OK for cruise ships to go directly from U.S. ports to Cuba, obviously that will have a significant impact on the industry. The question is, are the Cubans ready to receive more cruise ships, and if so, how many more? And what are they going to want in their negotiations for letting the cruise ships in?”
These are the types of questions everyone in the airline and cruise ship industry suddenly wants answers to.
One such executive is John Tercek, VP of commercial development at Royal Caribbean Cruises. He called Obama’s new policy definitely a step in the right direction.
“These are nice words, but I don’t see any immediate impact until a number of pieces fall into place,” he told Travel Markets Insider.
“The president has gradually liberalized travel and made small, incremental steps, and maybe this will lead to something bigger. But I don’t see anything happening overnight.”
Carnival Cruise Lines is not even commenting on the development yet, with a spokesman telling TMI that the changes must first be approved by Congress.
Michele Paige, president of the Florida-Caribbean Cruise Association, said she hopes Obama’s predictions will eventually be converted into concrete action resulting in more Americans traveling to Cuba.
“Basically, none of the restrictions have been lifted. It would be phenomenal to go to Cuba, and there’s a lot of pent-up demand, but Congress would have to approve it,” she said. “Under the law, any ship that does business in the U.S. cannot call on Cuba — and until that is changed, it’s kind of a moot point.”
Paige, whose FCCA is a nonprofit group representing 15 member lines that operate more than 100 cruise vessels in Floridian, Caribbean and Latin American waters, said the average cruise ship holds 3,000 passengers and injects $500,000 into the local economy per port call.
“Cruise tourism requires the least amount of infrastructure,” she said. “It’s perfect for Cuba. They don’t need hotels, they just need to move people.”
But what’s good news for one Caribbean island may not be so good for others.
“Destinations that provide a satisfactory experience for passengers and are doing a good job have nothing to worry about. It’s the destinations that are having problems that need to worry,” Paige said, adding that she’d be particularly concerned with the Bahamas and Jamaica — both of which are, like Cuba, relatively close to the U.S. mainland, and both of which have reported a rising incidence of violent crime against cruise passengers in recent years. “We’ve said continually that they have to be cognizant of the fact that when Cuba opens up, there will be competition.”
Clarisa Jiménez, CEO of the Puerto Rico Hotel & Tourism Association, does not seem especially distraught about the prospect of hordes of American tourists crowding the streets of Old Havana — a city that shares a common history with San Juan.
“It would certainly be a novelty, and the novelty has its attractions, although this applies more to the United States because Cuba was already open to the world,” said Jiménez. “We have to compete with everyone, not only with Cuba. This is a great time to reinforce marketing plans and be more pro-active in promoting Puerto Rico as a tourist destination.”
U.S. ports are promoting themselves too. Port Tampa Bay, which at 307 nautical miles from Havana calls itself “the closest full-service U.S. port to Cuba,” says it is prepared to move quickly to aggressively market itself to potential Cuban customers.
“Tampa’s emerging container business positions the port as a natural gateway to Cuba when ties are re-established, particularly in view of our historical ties and short transit time of 15 hours,” said port president and CEO Paul Anderson. “This will be driven by cargo demand and carrier decisions to serve the market. Moreover, the port would anticipate opportunities for bulk cargoes, general cargoes and cruise activity.”
Added Ellen Kennedy, a spokeswoman at Port Everglades: “We see Cuba as an economic opportunity, and we’re standing by, but we have to wait for whatever legislation is appropriate. There’s not much we can say yet.”
Experts agree that rapidly falling global oil prices were a contributing factor in pushing Cuba closer to a deal to repair its ties with Washington. Venezuela, which now supplies 98,000 barrels of oil a day to its socialist ally at deeply discounted rates, faces internal chaos as its petroleum-dependent economy spirals out of control — and the Castro regime appears increasingly worried that President Nicolás Maduro might end those subsidies or be forced from power altogether.
In 2013, Canadian-owned Cuba Cruise became the first company to offer regularly scheduled circumnavigation cruises around the island. The Toronto-based operator said that while unlicensed U.S. travel to the island remains banned, it does expect a boost from non-Americans who might want to see Cuba before it’s too late.
“We do not anticipate that Wednesday’s breaking news regarding the U.S. and Cuba will have an immediate effect on our business practices and model,” said the company’s president and CEO, Dugald Wells.
“However, we absolutely foresee an increase in bookings from international travelers who are drawn to Cuba’s incredibly preserved culture, its mix of old and new world charm, and who want to experience the iconic country before it opens its doors any further.” 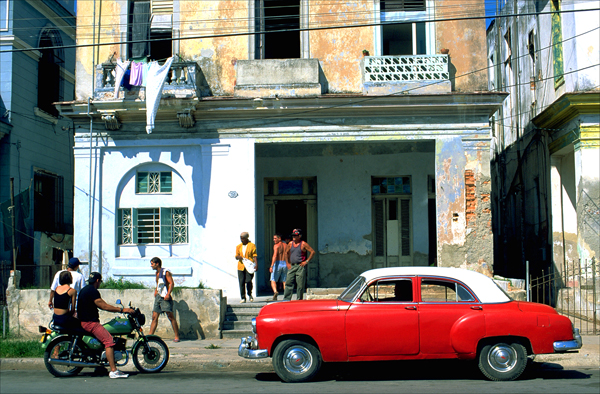 At the moment, six charter tour operators are licensed to offer flights between the United States and Cuba. The vast majority of those flights are from Miami International Airport, with a few flights also offered from Fort Lauderdale and Tampa. Direct service from Los Angeles was cancelled two years ago, and California-based Cuba Travel Service said it’ll soon reinstate service from New York JFK to Havana.
CTS says its initial request to operate Havana-bound flights from Newark Liberty was denied by local airport authorities, though JFK is still easily accessible from New Jersey, home to the nation’s second-largest Cuban exile community after South Florida.
Last year, between 300,000 and 500,000 Cuban-Americans traveled legally to the island, as well as 90,000 U.S. citizens not of Cuban origin — more than double the amount registered in 2008, when regulations were stricter.
American Airlines operates 20 weekly charter flights from Miami to Havana, Holguín, Santa Clara and Cienfuegos, and from Tampa to Havana and Holguín. JetBlue got into the act in late 2011, with three weekly flights on Airbus A320s from Miami to either Havana or Santa Clara.
Ronen Paldi is president of Ya’lla Tours USA, an authorized travel service provider based in Portland, Ore., that’s been bringing visitors to Cuba since 2002. He said it could be awhile before OFAC makes clear what’s allowed and what’s not.
Paldi pointed out that Obama vowed to relax restrictions governing the issuance of people-to-people licenses to Cuba in January 2011. But OFAC announced those changes only in April, and they weren’t implemented until June — half a year after they were first promised.
“The embargo is still in effect. We need to see if the restrictions to be eased will include [letting] airlines fly to Cuba. If we still have to depend on charter flights, that will remain a very narrow bottleneck that limits capacity on anything going to Cuba.”
Even if all the restrictions are lifted, he said, Cuba isn’t exactly a travel bargain compared to its Caribbean rivals — and the tourism bureaucracy is mind-numbing.
“It’s getting worse, not better. The Ministry of Tourism decided to consolidate most tourism companies in Cuba under one roof. So instead of decentralizing the industry, they’re centralizing it under the banner of Havanatur, which will create less competition. Also, they are not allowing American organized tourists to make their own reservations at paladares [private restaurants],” Paldi told us.
“They are almost full to capacity with their existing hotel rooms, tour buses, tour guides and parking lots. Finding rooms in Havana — not just at Christmas but in January, February or March — is already very difficult. ASTA predicts that once restrictions are completely lifted, more than one million Americans would flow into Cuba during the first five years. Cuba just isn’t ready for that.”
Joseph Hinson is president of Miami-based United Americas Shipping Services, which has been planning passenger ferry service to Cuba since 2010.
“Obviously, we’re very excited. We’ve been waiting to hear this news for the last six or seven years, and finally we see some real opportunities here,” said Hinson, whose Baja Ferries unit already transports 250,000 passengers per year between the Mexican ports of Mazatlán and Topolobambo. “We will resurrect our overall business plan and get in touch with key people in Washington immediately.”
Baja Ferries also owns the Caribbean Fantasy, which carries 1,000 passengers and 1,900 lane meters of cargo between Puerto Rico and the Dominican Republic. The vessel has 150 cabins and offers a nightclub and duty-free shopping on its evening departures to the D.R., which alternate between San Juan and Mayagüez.
Hinson hopes to launch similar service to Havana from South Florida — either Miami or Port Everglades, charging roughly $250 round-trip per passenger.
“We have done all our homework,” Hinson said. “We’d still have to negotiate with Cuban authorities over the exact location where we would place our ship. Truthfully, we’ve been contacted by so many people over the years who wanted to do this but never had the assets. We’re one of the few who actually have ships — and we’re ready at a moment’s notice.”