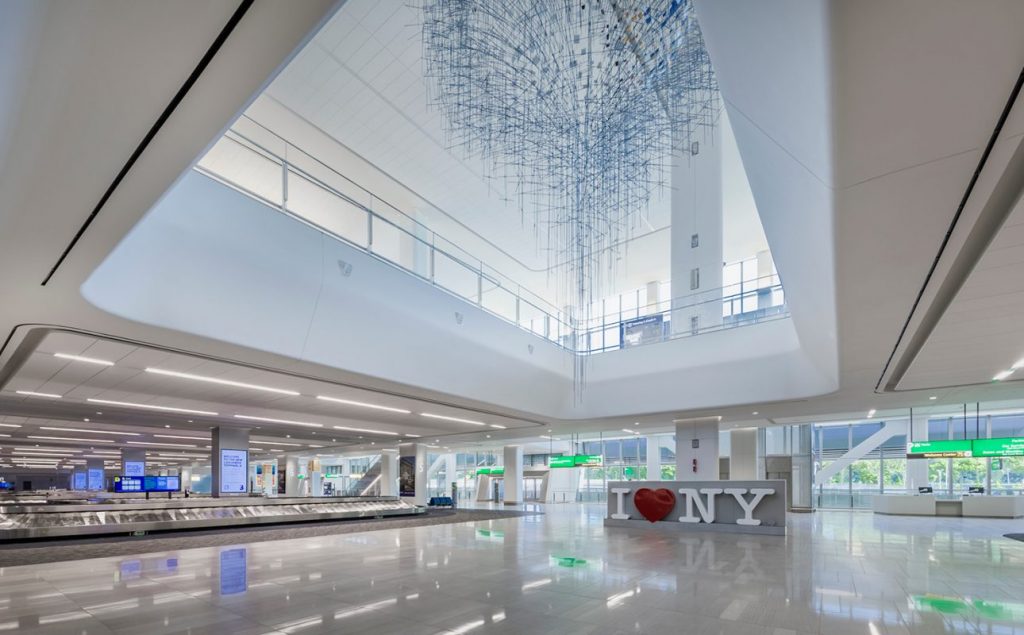 The opening represented a significant milestone in the $5.1 billion transformation of the airport, reports Vantage Airport Group, the lead equity investor, developer and manager of LaGuardia Gateway Partners, which has been overseeing the redevelopment and operations of LaGuardia Terminal B since 2015.

The construction at LGA currently represents the largest public-private partnership in U.S. aviation history. With the opening of the new Hall at Terminal B, the project is now 80% complete.

The opening of the Arrivals & Departures Hall comes as the aviation industry navigates a new age of travel through the COVID-19 pandemic. In response, Vantage has implemented a rigorous set of new protocols to enhance existing health and safety standards at each of its airports, including Terminal B, in partnership with the Port Authority.

To ensure the safety and well-being of passengers and employees, new measures include reduced person-to-person contact via plexiglass screens, use of electrostatic fogging equipment for sanitization, physical distance queue management, and increased cleaning and sanitization of all areas.

The Arrivals & Departures Hall was designed to capture the vibrant New York spirit through architectural and design finishes inspired by New York’s iconic neighborhoods, and a collection of public art installations commissioned for the terminal through a partnership with the Public Art Fund.

With the completion of the Arrivals & Departures Hall, construction will now move to demolition of the original terminal and the opening of gates in the western concourse.

Once finished, the new Terminal B will include 1.3 million square feet of new space, as well as elevated dual pedestrian bridges spanning active taxi lanes, a concept brought to life by design and architecture partner HOK.

Vantage will operate Terminal B through 2050.

The redevelopment includes a 35-gate terminal, a Central Hall, a parking garage, related roadways and supporting infrastructure – all with innovative construction phasing to deliver the project on time and without interrupting ongoing airport operations at one of the most critical airports in the U.S. airport system. The terminal’s iconic design features two elevated pedestrian bridges that span active aircraft taxi lanes – a first in the world – connecting the main terminal to two island concourses.

Project milestones to date include the completion of the parking garage in February 2018, followed by the opening of the first 11 gates and commercial offering in the Eastern Concourse in December 2018.

The inauguration of the Arrivals & Departures Hall on June 13 also saw the opening of the first pedestrian bridge that connects the Hall to the Eastern concourse over the top of the original terminal.

Vantage, headquartered in Vancouver, with a growing North American profile that includes a presence in New York, Chicago and Denver, has assisted 31 airports in its 26-year history, taking 20 from public to private management.