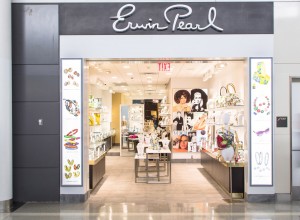 Erwin Pearl, a fashion jewelry brand crafted in Rhode Island, has the distinction of being the 100th new concession to open at Ronald Reagan Washington National Airport and Washington Dulles International Airport. This milestone was reached as the two airports are undergoing a massive overhaul of nearly every store and restaurant under concession manager MarketPlace Development.

“The Dulles Store has been doing very well since we opened,” said Michael McGratty, Erwin Pearl Director of Sales.

“We have a strong commitment to airport retail, including two stores at O’Hare and two at Sacramento International. We also have airport stores at Pittsburgh, Minneapolis/ St. Paul, Charlotte Douglas and Indianapolis and have aggressively been opening stores in high traffic areas including Disney Springs and Tyson’s Corner Center in the last year,” he tells TMI.

The focus of the Washington area redevelopment has been to bring a new variety of shopping and dining options to the airports, said Steve Baker, Metropolitan Washington Airports Authority vice president for customer and concession development, who has headed up the trans-formation.

“[We want to] provide our passengers with local, regional and national favorites that will enhance and highlight their time with us,” he said. “Our passengers’ journeys begin with us, and we want to make sure that beginning is a positive, memorable experience.”

MWAA and MarketPlace Development were also looking to create a sense of place that incorporates the uniqueness and identity of the National Capital Region.

“Reagan National and Dulles International are gateways to our nation’s capital. It’s vital that the airport food and retail offerings express the character of the D.C. metropolitan area and fulfill the needs of the modern traveler,” says Paul McGinn, President of MarketPlace Development.

The redevelopment is ongoing at both airports. Further announcements of new stores and restaurants will be made in the coming months.