Five years after the merger of spirits distributor WEBB and wine specialist Banks created a wines and spirits powerhouse in the region, CEO Andy
Consuegra tells TMI that the combined WEBB Banks has been an undeniable success.
“The merger has allowed us to go to another level. Five years since we merged, we are now five times bigger than we were at the time of the merger,” says Consuegra.
The merger demonstrated its value particularly well during the COVID pandemic, when Consuegra says the company’s growth was driven by its experienced team and strong portfolio of wines and spirits.
“Overall as a business, including both domestic and travel retail, we grew organically in 2021 versus 2019 by 23%. We had a very good year. Total growth was even higher, but that includes some new business,” he says.
“We have the experience and knowledge to work in a crisis. We had a plan. We didn’t just react. We were prepared.”
Open Caribbean markets WEBB Banks also benefited because the markets that were open did “extremely well,” says Consuegra.
“The USVI was off the charts. It had one of the best tourism years ever last year. Puerto Rico continues to do great. We had a very good 2020 there and had an even better 2021. The Dominican Republic did well,” he says.
“We grew despite some markets still being closed. Travel retail came back in the second half of the year. It started very slowly in 2021, but we had a pretty decent second half of 2021.”
In another plus, many Caribbean markets had a strong offseason last summer, says Consuegra.
“It was probably the best summer that we have seen in terms of numbers. What was open was off the charts. Turks and Caicos, the Bahamas, the Virgin Islands all had great summers in what is normally a slow period.”
WEBB Banks also made a concerted effort in the Caribbean to not rely solely on the tourists, but to cater to the locals on the islands as well.
“Our team, along with our distributors, made a shift from that on-trade focus to an off-trade focus. We also catered more to domestic consumption. So we were not as reliant on tourism, which we think long-term is only going to strengthen our brands,” says WEBB Banks COO Jose Castelvi. 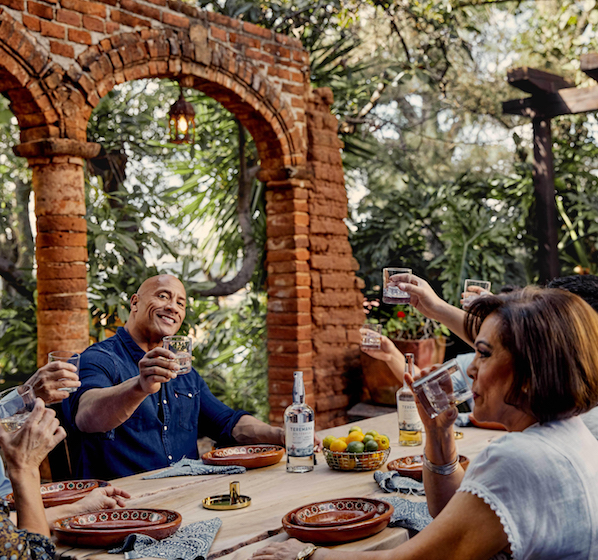 Teremana Tequila sold more than 600,000 nine-liter cases in 2021. The fast-growing tequila was founded by Dwayne “The Rock” Johnson in March 2020.

The power of the portfolio

“And we added some great new brands as well. Teremana tequila and Skrewball are two brands that helped deliver last year’s numbers, but we have high expectations for this year.”
Last year was the first full year for Teremana and in the U.S. it reached 600,000 9 liter cases in one year.
“Tequilas as a category are doing very well in duty free, domestic markets, and cruise lines. To have that one-two punch of Teremana and Casa Noble, we are very strong in the tequila side.
“Skrewball peanut butter whiskey hit two million cases last year. That’s a brand that is in all the bars. It has definitely been helping drive our growth.”

The WEBB Banks team
While many companies in the travel retail industry downsized during the pandemic, WEBB Banks went in the other direction and added new members to its team throughout the region.
“We know when a crisis hits there are certain things you do. The first thing you do is get your costs under control. We did that early on in 2020. But as 2021 came in and we thought it was going to be a good year, that’s when we leaned in. We hired people. We added more people in the markets. We raised our inventory levels and leveraged our relationships we developed during the bleak days,” says Consuegra.
“The last driver of growth this past year and why we are optimistic for this

year is our team. Jose Castelvi coming on as COO has been a great addition. He has brought a lot of stability to the organization. We have added ten people since COVID started. We have three people in Puerto Rico. We have someone in the Dominican Republic, Barbados, Antigua, Bahamas, and the Virgin Islands. We have two people in St. Martin.”
This year WEBB Banks is adding a dedicated person based in Central America to grow that region.
“It is an area that we see a lot of future growth potential for both wines and spirits,” says Castelvi.
“We are optimistic for this year. The markets are open. The portfolio is strong. We are in a good place with the cruise business,” says Consuegra.
“The supply chain has been challenging and we see the challenge continuing for a while. We are working to try and mitigate some of the out of stocks that came from the supply chain crisis. It has been challenging, but we think we have done the right things.”