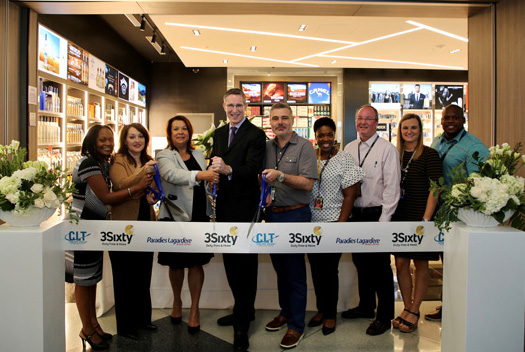 The 1200 sq. foot Charlotte store is the first physical implementation of the 3Sixty Duty Free & More brand after the launch last October, and features both store-front signage and in-store marketing collateral.

Although the store had been designed and opened prior to the announcement of the new branding, Donna Maxwell, Senior Vice President Global Retail Operations said that the company “chose Charlotte as our first official rebranding launch location due to our strong partnerships in Charlotte Douglas International Airport and this being our newest store design.”

The grand opening event included a ribbon cutting ceremony and champagne toast that was attended by Maxwell and other key 3Sixty executives, Charlotte Douglas airport officials, 3Sixty’s DBEA partners from Geathers Enterprises, and Terry Wimpy, of Paradies Lagardère, who handles concessions at the airport.

The unveiling of the new 3Sixty Duty Free & More store-front signage was celebrated with special gifts and promotions for the first 100 customers of the day.

“On behalf of Benny Klepach, owner and founder of 3Sixty, and the entire executive staff, I welcome the opportunity to thank the community and Charlotte Douglas International Airport for this extraordinary opportunity to offer duty free shopping here at Charlotte,” said Maxwell in her opening remarks.

3Sixty won the contract in September 2017 (while it was still DFASS) and opened a kiosk in April 2018 during the remodeling. Although renovations began before the company began the rebranding process, the company did not hold up the opening until after the re-branding in order to supply the demand from the Charlotte customers, said Maxwell.

Passenger traffic at Charlotte Douglas International airport is booming. CLT reported 46.4 mil-lion passengers in 2018, the second consecutive year of record growth. The airport is American Airlines second largest hub airport after Dallas and growing. AA is the dominant airline in CLT, accounting for more than 90% of flights.

Charlotte Douglas is in the midst of a 10-year, $2.5 billion renovation and expansion. The airport’s first major gate addition in 16 years took place last July, when nine gates were added in a 230,000-sq.ft section at Concourse A.

Concourse upgrades throughout the airport are ongoing. A $29 million 51,000-square-foot expansion of the east terminal where concourses D and E meet should be completed this summer. The 3Sixty store is located right at the entrance of the D concourse.

The unveiling of the first 3Sixty store was symbolic on a number of levels,

“The fun thing about the transition to the brand 3Sixty is that it is more than just a name change. It speaks to the values of the brand and is so much about innovation, and partnership. Earlier in our toast to launch our 3Sixty brand in Charlotte I took the opportunity to speak about the importance of our relationships in this location with our DBE partner, with Paradies, with the airport. These partnerships will drive the business. So this is a nice symbolic way to carry forward this new brand in a real concrete way.”

Donna Maxwell added: “What has been happening during this transformation during the past 12 months  — not just internally but now externally – brings it full circle and is a tremendous opportunity for us. It is very exciting and we are very pleased to launch it here in Charlotte as our first and our newest location.”

3Sixty’s DBEA partners, Rachel and Brian Geathers of Geathers Enterprises, own and operate multiple store locations within the airport. Their flagship store, Queen City Gifts and News, is a unique travel essentials shop that puts a Charlotte-specific twist on the airport shopping experience.

A family business founded by their father, Geathers has been operating travel essentials stores in the airport since 1994, and been partnering with Paradies for the past 8-9 years.

“Through our partnership with Paradies we were introduced to what was at that time DFASS, and we were offered an opportunity to join them in the 3Sixty duty free stores in Charlotte Douglas air-port,” Rachel Geathers tells TMI. “We like to say that we inspire everyone here to have bright lights and incredible merchandising, and we try to lead that charge.”

Geathers explains that their Queen City Gift and News store, located in the main atrium, is named – like the city itself– after Queen Charlotte of England.

“We are very proud of Queen Charlotte and what she means historically to this city and the developing Carolinas. A lot of traffic comes through this airport – [Ed. Note: it one of the 10 busiest in the country] and we are growing the international market. The real boom came when the banks started to establish their headquarters here, then a lot of technology companies started to open headquarters here. Now we are getting that international traveler, but we are also getting that west coast traveler, that New York traveler, and that New England traveler that we didn’t have before,” she said.

Commenting on CLT’s major expansion, she adds: “There is not enough space for all the traffic demand and the airport has been experiencing exponential growth over the past three years. This growth is reflected in the concessions. Our airport tries to have a balance of local flavor, with operators like me, along with national brands that people recognize.”

The CLT store is the first of several existing locations to be rebranded 3Sixty. “Later this year 3Sixty will open two new stores in DFW that were specifically designed with our new branding design elements,” remarked Maxwell.