The opening of the 4,000 sqm anchor duty free store in the Melancia Mall is another landmark in the history of Neutral –the oldest established border shop operator in Uruguay, with stores in the six cities where duty free trading is permitted. Over the past few years the company has significantly increased the amount of retail space that it operates, culminating in the new flagship in Melancia. TMI’s John Gallagher met with Neutral CEO Enrique Urioste to get a first-hand tour of the new store and observe how trading is going in the first few weeks following the official opening. 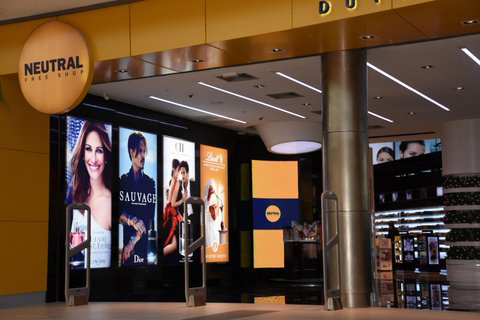 Urioste fully concurs that the current economic and political situation in Brazil is not the optimum time to be opening a new store, and that building the business in the near-term will be challenging: “Sales during the first few weeks of operation are below our optimistic sales budget made earlier in the year, though they are in line with the reality of what is happening on the border,” he explains.

But there are signs that the new store will bring in incremental business, he notes, adding that Neutral’s downtown numbers are in line with the levels in effect prior to the opening of Melancia, indicating that the Mall is bringing additional sales.

“So far we are mainly seeing new clients in the Mall who haven’t visited Neutral stores in the past. Where we normally see between 35% and 40% of our weekend sales coming from people who carry our loyalty card, we only see 10% of loyalty customers in the Melancia store. This will obviously change as we sign up many of the new visitors for the card.” 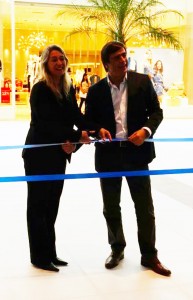 “In Melancia we are seeing $100 per ticket compared to about $80 in the downtown store. In general, we are selling more high end products in almost all categories. Johnnie Walker Blue, for example, has performed exceptionally well during the first few weeks, whereas in downtown it will only sell a few bottles per month. We are also seeing high end wines doing much better than we expected.”

Different brands appear to be driving sales in the Mall, and have included some surprises, he says.

“In textiles, GAP and Lacoste products are performing exceptionally well. Tommy Hilfiger, however, which does well downtown, is doing less well in Melancia. Surprisingly, sales of Ray-Ban sunglasses are doing well even though the duty free price is higher than the Brazilian domestic market price. Sometimes it seems that the temptation to buy outweighs price considerations for these new customers, especially if we have the model and style that they want. Perfumes and cosmetics continue to be strong sellers.” 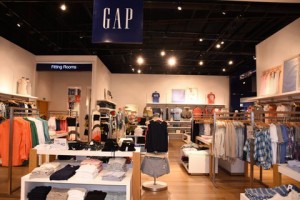 Neutral is particularly pleased that Melancia Mall will become the new location of the Uruguayan Immigration office for Rivera, becoming an obligatory stop for all bus and car passengers leaving Uruguay for Brazil.

“This new Immigration office is crucially important because Rivera is the main crossing border for Argentines going to or from Brazil. We are making sure that we have enough stocks of the products that sell well in Argentina,” stressed Urioste.

Urioste points out the success of Pommery champagne, which has long been number one in Argentina’s domestic market due to tenacious work from distributor Ricardo Luis. It is also selling very well in the Melancia store.

“Clearly the Mall’s out-of-town location and easy parking have encouraged Argentine tourists to shop in the Mall as they drive through Uruguay to Florianopolis and other beaches in Southern Brazil,” he observes.

But Urioste also believes that the Mall is attracting a new visitor from Brazil as well, shoppers who have changed their travel habits as the economic crisis negatively affected disposable income.

“We already know that many of the Brazilian shoppers in the Mall have never been to Rivera before. Although it is not very scientific, surveys we have done instore indicate that many shoppers with a fairly decent disposable income have stopped taking plane journeys and have started to take car journeys to do some shopping in Rivera that they would have done in Miami, Buenos Aires or Chile in previous years. I should stress that these are informal surveys held instore, but probably indicate a change of behavior as a result of the economic crisis.”

Compelling store design
Neutral is doing everything it can to accommodate this new customer, from store layout to product offer. The store has been designed by architect Monica Ariaudo using a walk-through concept similar to some airport stores, and Urioste comments that he personally thinks the Melancia Neutral store to be one of the best layouts Ariaudo has designed.

“She has designed many stores in different countries and this is one of the finest. We do not want to force shoppers to follow a certain route, but the design helps the shopper visit every category and to pass by almost all the shop-in-shops. We have also designed the store to surprise the shopper with many options to interact with us. Women can try out treatments as they enter the store. Kids can play games in the electronics store. Shoppers can try the wines they are interested in buying before purchase.

“We also have a Diageo chill out bar where shoppers can have a relaxing drink. Every weekend we have a professional barman teaching how to prepare different cocktails.” 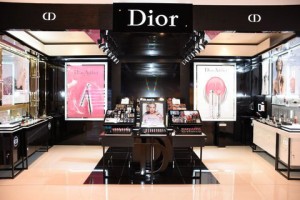 The Neutral store even has a nursery where parents can leave their small children under professional supervision while they shop. “This innovation has been very well received,” says Urioste.

Neutral is also making sure that check out is fast and easy, and filled with attractive opportunities to persuade shoppers to make one more purchase:

“Visitors can pay at any one of the 24 cash points. And the line allows people to see a selection of specially chosen products for last minute purchase. The whole Neutral team has been especially pleased at the impulse sale in the checkout line, which has reached 7% of our total sales in the new store,” says Urioste.

As in its other locations, Neutral constantly strives to give shoppers something a little different from other border stores. “Since more than 35% of our sales come from perfumes and cosmetics – this area is a very important part of offer. In Melancia, Dior, Lancôme, and the new brands we have just introduced – Kérastase, Clarisonic and the nail bar — have been doing very well and play a very big part of getting shoppers to stay in the perfumes and cosmetics sector.”

The goal is to give shoppers space, service and the very best assortment in all categories though, says Urioste. 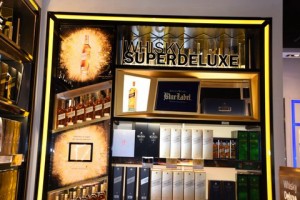 “In wines and spirits, we have a very good relationship with Diageo, as you can see with our Johnnie Walker bar. Our Chilean wine selection is very extensive and wine lovers can sample the leading brands at our special wine tasting bar. We have introduced the very latest wine dispenser, similar to the one used in Heathrow Terminal 5, to ensure that the premium wines we sell are served in optimum conditions.”

In addition to whisky and wine, Neutral is selling a significant amount of beer this summer, says Urioste. “We have a very big international selection with brands such as Fuller’s, Bombardier, Kaiserdom, Corona and Budweiser. Heineken is probably the biggest brand at the moment and features in many of our monthly promotions. We also have an extensive section of gourmet food, offering our sybaritic visitors options to taste and purchase a wide selection of gastronomic products.”

Some categories have been affected more than others by the Brazilian downturn.

“Electrical goods along the whole border are suffering. Brazilian domestic prices have stayed stable in spite of the devaluation – and with very little price difference duty free sales have been disappointing. Brazilian customers prefer using their Brazilian credit card which comes with the artificially low prices and extended interest free payment terms in Reales. The biggest exception to this generalization is Nikon, which we have worked well for several years. The price difference is still noticeable and we offer a good selection of the best Nikon products.”

On a positive note, the Uruguayan border stores can offer some unique products not found in an airport store. Neutral has the exclusive rights for BMW Motorcycle apparel and accessories, and is taking full advantage of the exclusivity and discount:

“We are selling helmets that cost US$ 1,000 in Melancia that may cost as much as US$ 3,000 on the Brazilian domestic market. The bike rider who buys a helmet like this will often buy clothing and high price items in other categories as well,” says Urioste.

The Melancia Neutral store, open at this writing for only a few weeks, is obviously a work in progress, and a number of new brands and shops offering “affordable luxury” will debut in the months to come.

“We are always looking to bring new brands into the store. In mid-December Brooksfield apparel will open its shop-in-shop and in January we will open the first Victoria’s Secret on the border. Brands like Hermès and Cartier are not ideal for the border. Instead, we must constantly offer a selection of brands that can be defined as affordable luxury and meet the shopping needs of the people who come into our stores.” 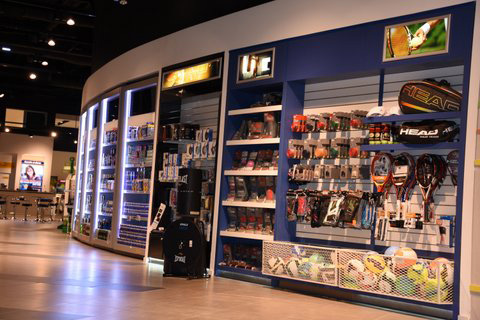 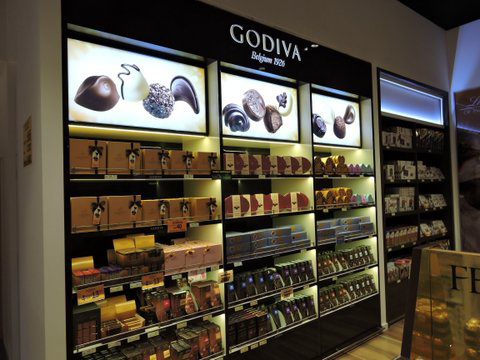 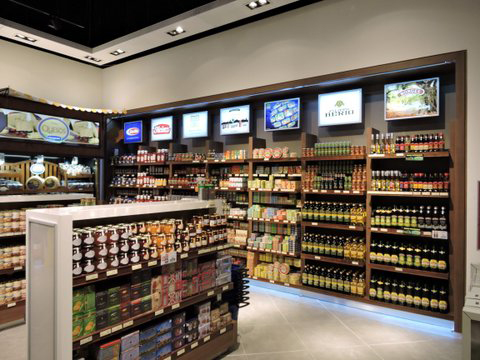 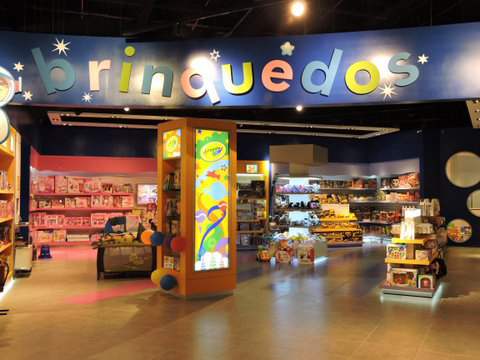