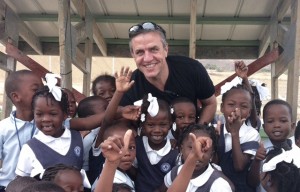 Olivier Bottrie with the students

In a remarkable accomplishment for which the travel retail industry should justifiably be very proud, the world-class Lycée Jean -Baptiste Pointe du Sale school in Saint-Marc, Haiti will be celebrating its fifth anniversary this year. Conceived by three travel retail executives in the aftermath of the devastating earthquake that hit Haiti in January 2010, the school – developed by the Hand in Hand for Haiti Foundation — opened in October 2011 with 153 students. Today it teaches 350 children beginning from three years old– and will eventually encompass 700 students a year.

With the appointment of Erin Morales as Director of Development, Hand in Hand for Haiti’s first U.S.-based employee whose responsibilities include global resource development, the project enters a new phase, with an even greater focus on sustainability.  (See here for more about Morales).

TMI’s Lois Pasternak had the opportunity to meet with Olivier Bottrie late last year to discuss where the school is today, how well it is meeting its mandates, and what Hand in Hand for Haiti is striving for in the years ahead.

“Our focus continues to be to deliver the education that we set out to deliver. To this end we have 20 teachers, several of whom teach English; the rest of them teach French, and also Creole. And we have seven grades now, beginning with nursery school at age 3,” begins Bottrie.

“This is not ‘mass education’ or a ‘good enough’ education. It is about providing these kids with the best possible education and the standards we have set are those of the international schools in New York, as a benchmark. Here is a picture of one of the students with my daughter, and I tell people that there is no difference between these two and I want them to have the same education.

“Are we there yet?  Of course not, we are still a start-up. But we are raising the bar, and increasing teacher training. We have important supporters, in France, in the U.S., and we have a university helping us with teachers. So we have a lot of people helping us to make sure that the program is as good as it needs to be,” he says. 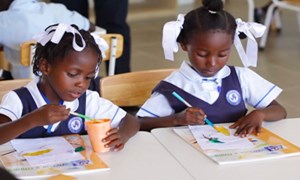 Bottrie stresses that the Lycée is a free school. The parents pay no-thing and about 90% of the children in the program come from very poor backgrounds. Along with their education, the students get uniforms, two meals a day, and transportation from the city to the school.

“We have a nurse, we have a psychologist, we have a social worker, we have a doctor come once a week. We train teachers. We hold ‘camp’ for Easter break and the summer. This has been the vision from the beginning and we have not moved an inch from it,” says Bottrie.

“This is expensive – for Haiti. But it is about the education. This is the future. Public school in NYC for one child is $15-20,000. In France it is 8-12,000 euros. We supply the books, we supply the school supplies, but this is our vision and we are basing ourselves against the American schools I mentioned, not against the worst case scenario.”

“Today we are spending a lot of money buying diesel fuel for generators. It is too expensive, and it is not right because there is a better way to get power. We need to switch from diesel to solar. We are working on raising money specifically to bring solar to the school,” explains Bottrie.

“Water –our second priority today — is also an immediate concern. We do not have water in the school. During 60-70% of the year we capture water from the sky using a rain catchment system, but this is not drinking water, it is to wash with, to clean with. Our vision is to bring water to the community when we bring water to the school. Not only would it save us money, but the town would have water for cooking and every-thing else, as well as water to irrigate the land around them and give people a job. We have a project that has been designed for us. We know where the water is. And we are trying to raise money for this specifically as well.”

The water project will cost about $200,000 and the solar project will be around $350,000. Negotiations for funding are underway now, he says.

“From the beginning we had a concept of community involvement, nearby and in the wider community of Saint-Marc,” he says. “We want to be a good citizen. We have created 93 local jobs so far, of which 58 are full time jobs. Our lowest paid employee is paid twice the minimum wage of Haiti, plus they get meals. The school has become an economic force in Saint-Marc.  We also consume a lot of local products. The mayor has told me that we are the largest employer in the city today.”

HiHH’s founders think of the Lycée as a “school plus”– the plus being economic development.

“We are doing much more than just providing education for kids. Our core goal is to provide a group of educated young people who will want to stay in Haiti and develop its future. But today, we are building something more immediate.”

This year about 90% of the children in the program come from very poor backgrounds, up from 80% when the school first opened.

“The community around us is given priority to attend. About 1/3 of the kids come from the surrounding community, and 2/3 from the greater Saint-Marc area. And every child comes every day.”

Teacher training and volunteer internships are other key elements sustaining the school. A new dorm that houses 42 people on two floors was recently completed for the college student interns and summer camp staff volunteers, who come from France, the U.S. and Canada.

This past October, Olivier Bottrie was awarded the Ordre National Honneur et Mérite (Order of National Honor and Merit) from the Haitian government in recognition of his role in the funding, building and operation of the Saint-Marc Lycée.

This is Haiti’s highest honor, bestowed in acknowledgement of distinction in such areas as charitable works, diplomacy, politics and the arts.

Bottrie appreciates the honor, but sees it in terms of how it can help the school going forward.

“The award gave us recognition and the most sought after public interest status. This is very important. Next we need to obtain a duty exemption, so we do not have to pay taxes on everything that is imported. We have been working on obtaining this since 2011,” he says.

In more recognition for HiHH, French bank Meeschaert Group, on the occasion of its 80th anniversary last year, donated more than one million dollars for scholarships for students attending the school.

In its announcement, Meeschaert said:

“Our goal is to support 80 Haitian children attending Lycée Jean-Baptiste Pointe du Sable in Sant-Marc, through the Hand in Hand for Haiti Foundation, by funding at least 80 scholarships of $5,000 each, over the next three years.”

Meeschaert also called on its network of employees, clients, suppliers, associations and foundations, and artists and their galleries to join with it in supporting the cause.

For information on how you can help support Hand in Hand for Haiti, please go to: http://hihh.org