The Encuentro Border Shops Conference held in Montevideo, Uruguay on November 9-10, was filled with information-packed sessions presented by government and business officials from Argentina, Brazil and Uruguay. The two-day event, which was organized by South American Duty Free Association ASUTIL in association with the Chamber of Entrepreneurs of Free Shops of Uruguay (CEFSU), welcomed a capacity crowd of 200 registered delegates to the conference and networking sessions, which included an opening cocktail party, breakfasts, lunches, and a Gala Dinner. 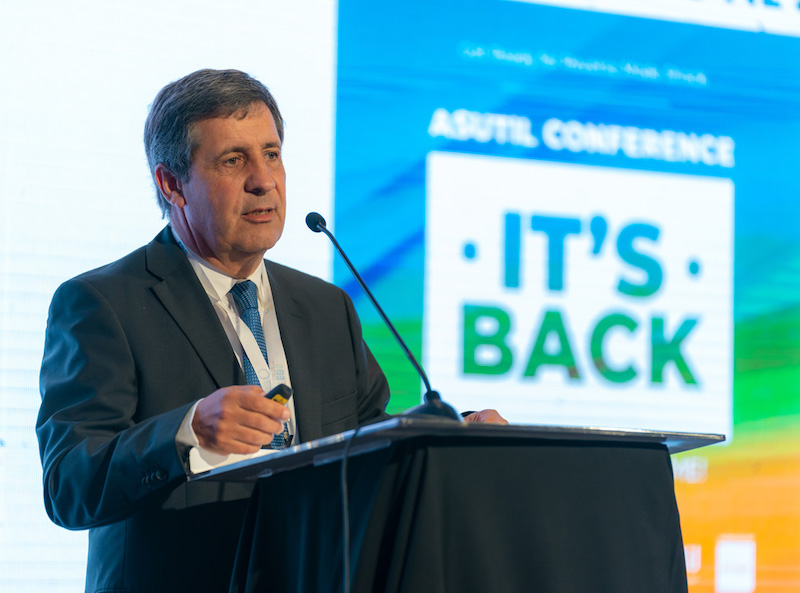 ASUTIL Secretary General Jose Luis Donagaray opened the conference, reiterating that the return to in-person meetings and conferences was of significant importance, especially because the event was celebrating 35 years of duty free trading on the Uruguay / Brazil Border.

Recalling that the first stores were opened in the cities of Rivera and Chuy back in 1987, followed in later years by stores in Acegua, Artigas, Bella Union, and Rio Branco, Donagaray stressed that the Association would continue to campaign for increased allowances for travelers and look to improve pick up of pre-sold orders and improve and expand the home deli-very service recently introduced in Brazil.

Carlos Loaiza, CEFSU Secretary General, gave an overview of the business on the Uruguayan border, which he said was slowly recovering: sales had reached US$283m in the 12 months ending October 2022, up from $174m in 2021 and $146m in 2020. He reminded delegates that the duty free industry had helped increase economic growth and employment in border cities for 35 years and that the business continues to contribute an important cannon to Uruguayan government finances. 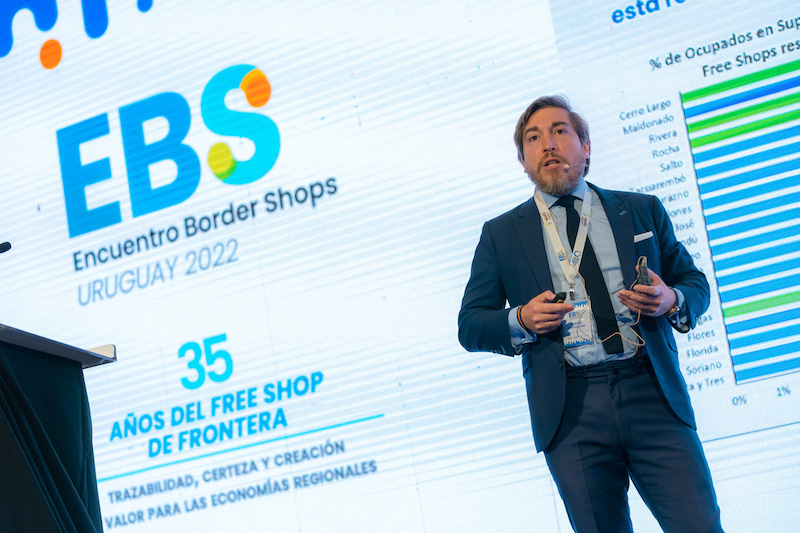 Carlos Loaiza, CEFSU Secretary General gave an overview of the business on the Uruguayan border before a capacity audience at the Encueunto Border Shops Conference in Montevideo on Nov. 9.

Alvaro Delgado, the current Secretary of the Presidency of the Uruguayan Government, praised the duty free business for its commendable behavior during the pandemic, which had forced the closure of all border stores. He also lauded the industry on how it has adapted to the new restrictions when the stores reopened.

“The government fully realized that the border store business provided more than 2,000 jobs in border stores and almost 1,000 more in ancillary businesses,” said Delgado, adding that officials were aware of the many benefits provided by border operators: salaries paid in the border duty free store were higher than the normal average in other retail stores and the positive attitude of border entrepreneurs was good for the hotel and restaurant business. He also said that government is actively encouraging the redevelopment of regional airports to help the development of ‘shopping tourism,’ and would continue to look at ways to help the positive attitude of the industry for the good of the whole country.

Brazil: could soon have 28 border stores

Brazilian politician Frederico Antunes detailed the 18 stores currently operating on the Brazilian side of the border and announced that he expected another 10 to open within the next few months. While the uncertain economic situation had slowed store development somewhat, he expects that lower inflation and an optimistic outlook would lead to a more positive 2023.

In addition, route development from both Gol and Azul airlines would encourage more travel to the south of the country where most stores were situated, and Antunes expects further growth next year.

Uruguayan Deputy Marne Osorio, a long-time defender of the border duty free industry, stressed the importance of border retail as the key to economic activity on the Uruguay Brazil border.

The travel retail industry in Uruguay is responsible for more than 3,000 direct and indirect jobs, he stated. And rather than seeing the Brazilian stores as a threat to the livelihood of Uruguayan retailers, Osorio envisions that a whole industry of shopping tourism would develop.

The goal is to make sure that Uruguayan retailers are able to compete on a level playing field with their Brazilian counterparts. The forthcoming elimination of the “negative list” of products would help fulfill this aim, he said. 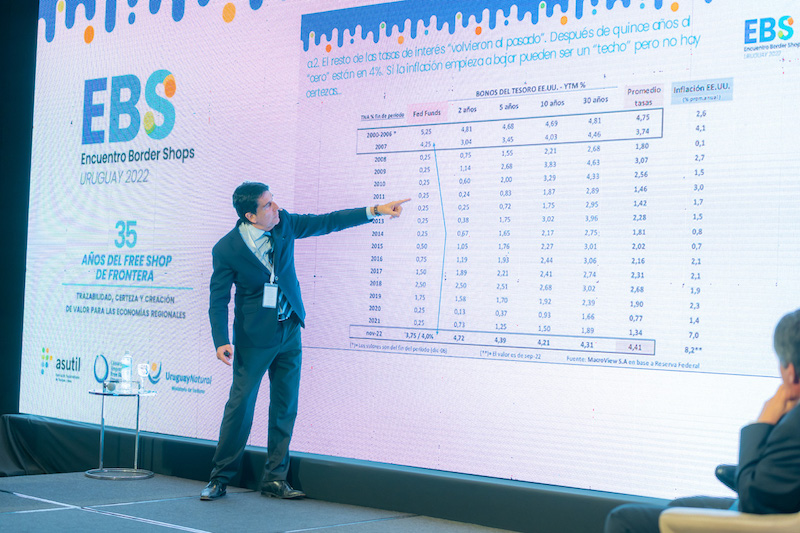 Looking at the money side of the business, Argentine economist Carlos Melconian explained that world and regional economies are both facing an uncertain future, and with the recent interest rate adjustments and increases in raw material prices, the world economy had slowed down.

“We will see in 2023 whether the adjustments have been too aggressive as governments sought to control inflation but keep some degree of economic growth in order to maintain high employment levels,” he noted.

Melconian claims that until the panorama becomes clearer, investors will be more selective where they invest their cash and consumers will continue to be cautious with their expenditures, especially as the cost of credit is now higher.

On a regional note, Melconian thinks that the outlook in Brazil was brighter than in neighboring countries. President-elect Lula was not an experiment, he stated, his past two successful presidential terms have led most observers to believe that the new government will not be excessively populist. Inflation seems to be under control and other macroeconomic indicators are positive.

Although Lula would be faced by a hostile center-right Congress, he would be successful in keeping the economy stable, said Melconian.

The situation in Argentina is different according to Melconian. High inflation close to an annual rate of 100% and a very uncertain and volatile exchange rate (Official rate: $USD =172 AR Pesos / Grey market $USD = 312 AR Pesos) are worrying. But both could get worse, with higher inflation and a risk of devaluation, if the government took no action, he said.

Furthermore, with a split in the current party in power and a divid-ed opposition, it is still unclear which candidates would run in next year’s presidential elections.

Meanwhile, the private sector continues operating their respective businesses under increasing inflation and multiple exchange rates, as well as with limited access to foreign exchange that can be a big problem for travel retail operators looking to pay suppliers in a timely fashion.

Juan Labrada, Commercial Policy Advisor at the Uruguayan Finance Ministry, closed the first day, confirming that the Urugua-yan government policy is to work with its Brazilian counterparts to ensure clear rules for all operators in the border duty free shop business. Cooperation was always beneficial he claimed, and the Uruguayan government continues to strengthen trading conditions on the border. Plans are going ahead to improve regional airports close to border cities and to create a new logistics hub in Rivera. 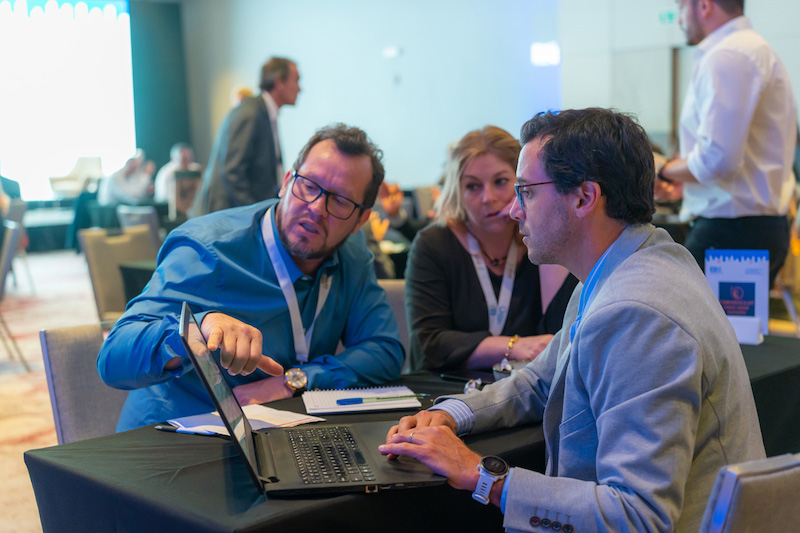 One on one networking meetings reportedly led to some immediate orders.

Following a group luncheon, networking sessions got underway in the afternoon with suppliers able to meet buyers from duty free stores in Brazil and Uruguay (above). Many reported they received orders for immediate shipment.

A Gala Dinner, sponsored by Bah, DFA, Dufry, Neutral, Siñeriz, and The Place with support from Campari, Diageo and Pernod Ricard was held on the rooftop terrace of the Hyatt Centric Montevideo on Wednesday evening. 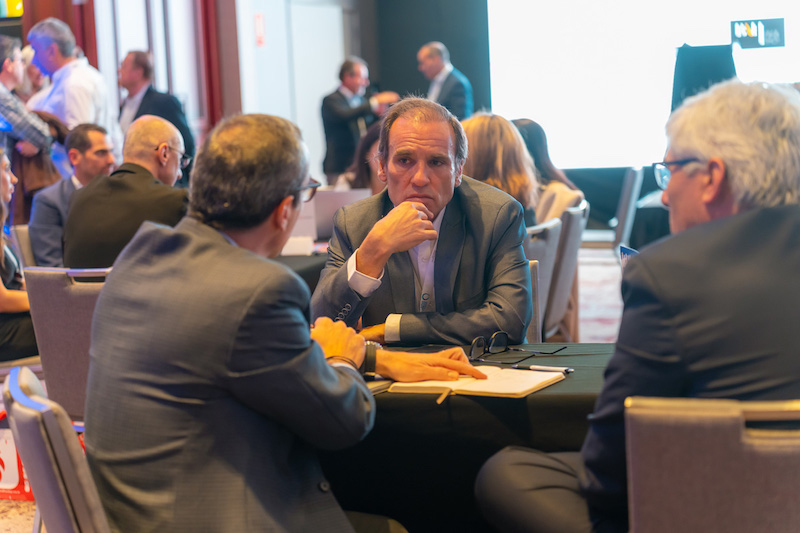 Uruguayan government policy had integrated successfully with private initiatives to introduce duty free shopping on the country’s borders with a law passed in 1986. Stores began operating in Rivera and Chuy in 1987, according to Viera.

Over the last 35 years, shopping tourism had allowed private investors to increase the quality of hotel and restaurant services for all tourists and this sort of tourism was a powerful addition to beach and spa tourism in various parts of the country. Similar to the earlier speakers, Viera agrees that shopping on the Brazilian side of the border is not a threat to Uruguayan stores but an opportunity. He lamented the fact that the Uruguayan government had not become more involved with their Brazilian neighbors as they developed their regulations, which would have ensured clear rules for all players. 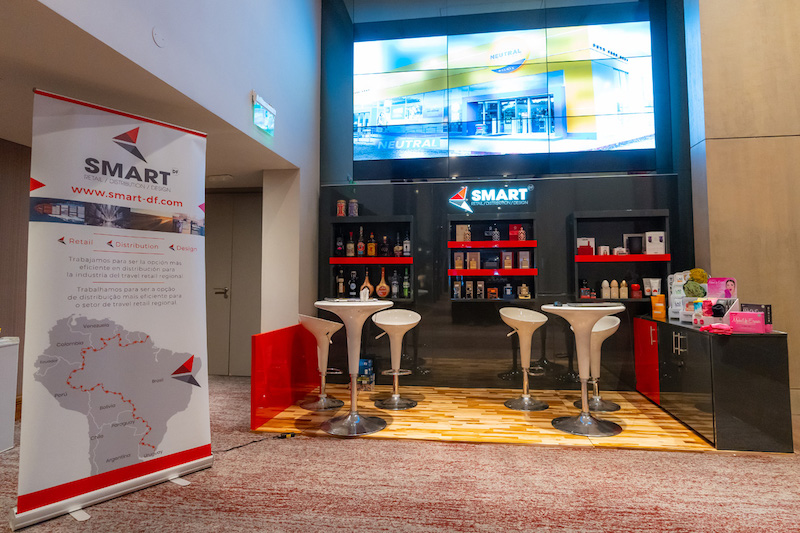 One of the companies that took advantage of exhibiting at the Border Conference.

Adapting e-commerce possibilities for border shop operators and developing logistics and infrastructure to make operations work easily for all operators are also on the government agenda.

Oscar Maria Betancur of Via Balcao Consultants ran-down the latest changes in Brazilian customs legislation and how it affects the border shop business. After cautioning operators to avoid problems with Brazil anti-dumping legislation with regard to certain products like car tires, loud speakers, blankets and other textile products occasionally sold in border stores, he emphasized the importance of correct invoices and including a complete packing list for all shipments to border stores in Brazil. To avoid problems and delays in clearing merchandise, Betancur recommending using a Customs broker who completely understands the idiosyncrasies of the legislation as it affects border stores.

Jaime Borgiani, National Director of Uruguayan Customs, presented a short but informative summary confirming the recovery of sales on the Uruguayan side of the border. According to Customs estimates, sales in Uruguay would reach $252m in 2022, an increase of 44% on the previous year and in excess of the $231m in 2019, the last full year of trading prior to the pandemic.

Alcoholic beverages are still the biggest category in the Uruguayan border stores and Borgiani expects sales to hit $100m this year, an increase of 19% on 2019. 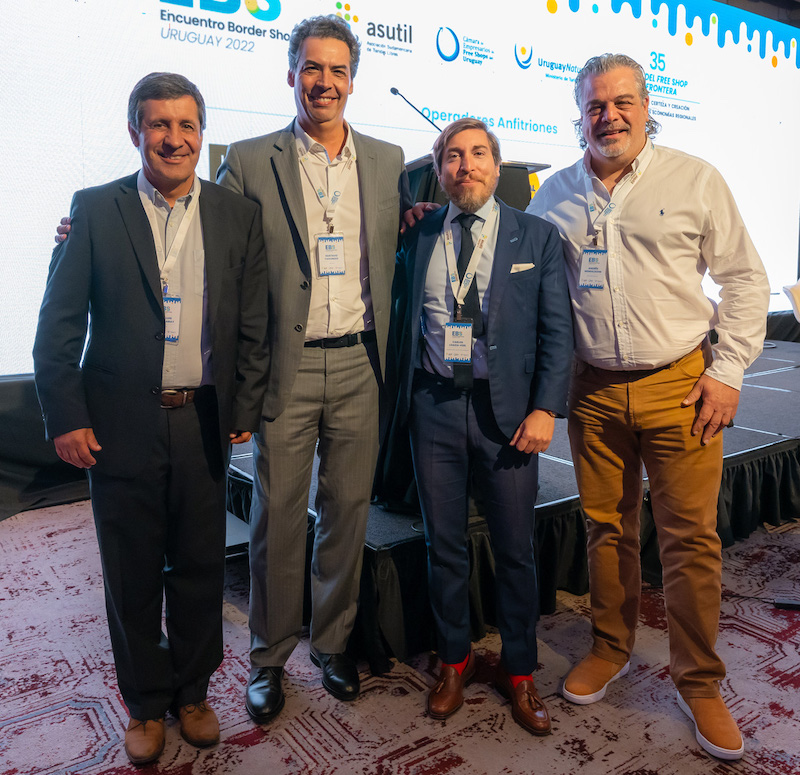 Altemir Linares de Melo, head of Receita Federal (Brazilian Customs) in Porto Alegre, spoke on the development of the border shop business in Brazil. Since the first store opened in July 2019, the Receita Federal has recorded 2,280,292 separate sales operations through the end of October 2022. Of these, 2,039,062 were made by Brazilian residents, 204,786 by Uruguayans, 29,918 by Argentines and 5,071 by Paraguayans.

Sales in the 28 shops operating during the first nine months of the year reached $ 35.1m, said Linares de Melo. With 913,000 operations recorded the average sales ticket was $38.44.

Gustavo Fagundes, President of ASUTIL and COO of Dufry do Brasil and Andres Mendelsohn, President of CEFSU and CEO of DFA Uruguay were the closing speakers.

Both thanked delegates for their assistance and promised similar events in the future. Donagaray confirmed the next event was a return to the annual ASUTIL

Conference to take place in June 2023 in Buenos Aires. In an important first, ASUTIL will be working with TFWA in organizing the event.

More information will be available at the end of the first quarter next year, said Donagaray.