One on One with CPI Managing Director Susan Gray

There is an unprecedented wave of airport infrastructure and terminal investments underway in the U.S. – a phenomenon that began prior to the pandemic outbreak, but which should accelerate since the U.S. Department of Transportation’s Federal Aviation Administration (FAA) announced it is awarding nearly $1 billion from President Biden’s Bipartisan Infrastructure Law funding to 85 airports across the country to improve terminals of all sizes.

Denver International Airport (DEN) is in the forefront of preparing for the future. Passenger traffic is returning at an incredible rate, and DEN is now ranked as the third-busiest airport in the United States and one of the top ten busiest airports in the world according to Airport Council International’s data for 2021. In recognition of its new concessions program, DEN has even been shortlisted for Airport of the Year at the Frontier Awards.

TMI speaks at length with Susan Gray, managing director of the key consultancy – Concession Planning International –that is helping DEN develop and implement a Master Plan for its concessions that is designed to be a benchmark for decades to come.  Lois Pasternak reports. 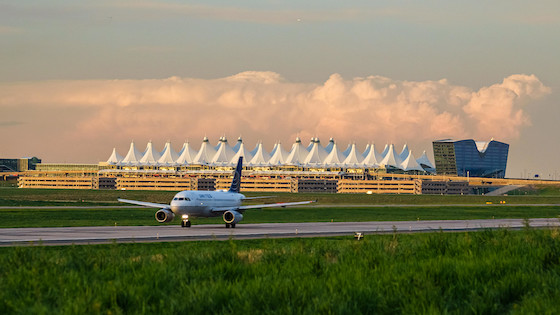 Last fall, Denver International Airport CEO Phil Washington announced Vision 100, a plan to ensure that the airport will have the capacity and infrastructure to support 100 million annual passengers within the next eight to 10 years. This strategic plan will guide the airport’s work over the next three to five years, and was formulated after months of intensive
research, including the consideration of community, employee and stakeholder feedback and suggestions, said the airport.

Most of the planning related to the concessions program was done in close coordination with Australia-based specialist airport commercial planning consultancy Concession Planning International (CPI), which has advised on world-class programs for more than 100 airports across six continents.

DEN began working on its Master Plan long before the announcement of Vision 100, however. The Airport Authority originally engaged CPI back in 2017 to workshop the commercial and customer experience opportunity that existed at the airport. 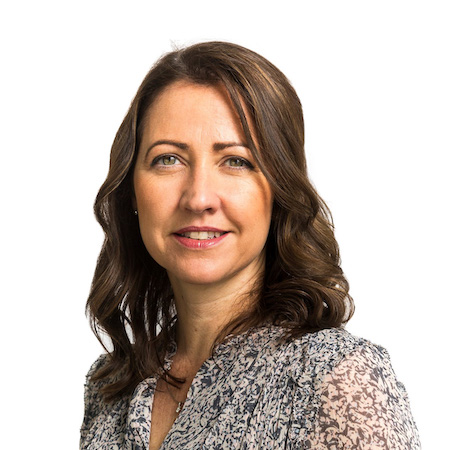 “The DEN project has been a huge and ambitious undertaking on the part
of the Denver International Airport management team,” CPI Managing
Director Susan Gray tells Travel Markets Insider.

“These initial engagements have developed into the most exciting, professionally respectful working relationship, and the creation of what we believe to be one of the most comprehensive, considered, and ambitious strategic concessions programs we have worked on in the last decade,” she added.

Since that 2017 workshop, CPI was engaged to develop and support implementation of an airport-wide commercial Master Plan and strategy and plan for the three main concourses at Denver Airport, each one handling circa 20m+ passengers. Currently handling around 65 million passengers annually, DEN is forecast to reach 110 million before 2040.

DEN is centered around the Elrey B. Jeppesen Terminal—which acts as a
processor. This is the airport’s iconic main building with roof sails that mimic the snow-capped Rocky Mountains beyond. Jeppesen Terminal celebrated its 25th anniversary in 2020.

This processor supports three large linear concourses which are linked by an underground train as well as a pedestrian bridge from the main terminal to concourse A.

She says that the concessions Master Plan that CPI and DEN have developed does the following:

• Maximizes the concessions space in the ‘center cores’ of each concourse;

• Identifies and maximizes the concessions opportunities throughout each concourse at concourse level and mezzanine level where possible to do so, including the new expansions;

• Revisited the category mix and identified the appropriate split of retail, travel convenience and F&B in the future;

• Rearticulated the airports’ vision for the concessions program, ensuring that it attracts the very best operators with the most appropriate brands and concepts for its passenger mix by concourse and reflect the very best that Colorado and Denver has to offer;

• Very importantly – ensured that the program would provide great opportunities for local operators and brands to do business at the airport. 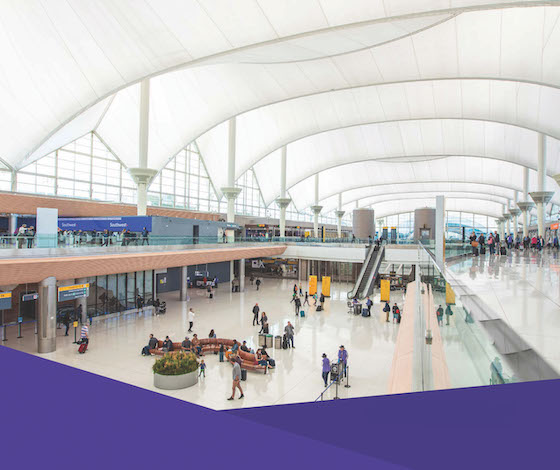 The Great Hall project is currently working on Phase 1 and Phase 2 concurrently. Phase 1 work is in the center of the terminal where crews are constructing new ticketing areas for United and Southwest, widening the balconies on Level 6, adding four new restrooms and adding 31,000 square feet to Jeppesen Terminal.
Phase 2 work broke ground this summer on the north end of the terminal. The primary focus of Phase 2 is to enhance security by building a new security checkpoint on Level 6 in the northwest corner of Jeppesen Terminal. All Phase 2 work will be done by mid-2024. However, the new checkpoint is scheduled to open by early-2024.

“The new spaces in the concourse expansions are incredible spaces. We are immensely proud of them,” says Gray. “There is a marked contrast between the old infrastructure and the new infrastructure. While this is a little frustrating, it’s a very tangible expression of DEN’s ambition; they promised a better experience, and they’re making it happen.”

CPI did not design the new spaces in isolation, Gray explains further.

“We spent a lot of time making sure the seating strategy will support the concessions delivery. By identifying the amount and type of seating needed in each area of the airport, with an emphasis on providing what we term ‘F&B-friendly’ seating, we can ensure the F&B concessions can maximize their opportunity.

“In a very busy, capacity constrained airport, passengers get the best service, as they can be served fast and consume their purchase in their preferred location whether that be nearby or in a remote gate lounge,” she says.

When the new CEO Phil Washington arrived last year, he re-stated the intent to enhance the customer experience as part of the airport’s new Vision 100 strategic plan.

“The concessions Master Plan supports this by providing better quality environments, greater choice and essentially as much concessions capacity as possible as we plan to meet the growing demands of DEN’s traffic,’’ she says. 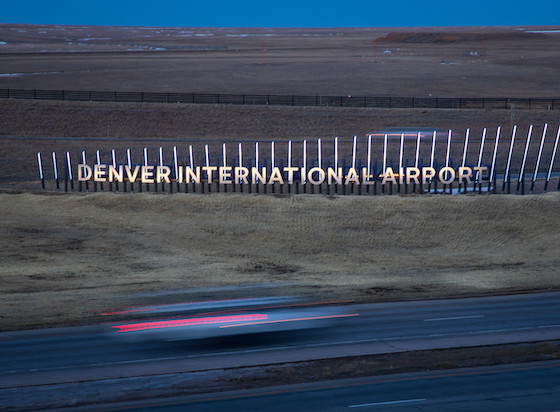 Balancing challenges and compromise
As airport commercial planners, CPI is used to compromise, stressed Gray.
“Unlike other environments, we understand and accept that our customers are primarily in the airport to fly somewhere, not buy. It’s our job to balance that with the airport’s need to generate non-aero revenue, and our collective desire to deliver a great experience to everyone who travels through our infrastructure.”

Even with the expansion, challenges still existed with some concession spaces, she admits. Despite the large scale of the expansions, DEN is still very space constrained when all the functional, operational and customer service requirements were factored in. As a result, some of the new concessions had to have more support space at apron level and less at concourse level. CPI tried to give these locations as much additional space as possible, says Gray.

“The new spaces at concourse level are of super quality; strategically placed to provide choice to passengers in a superb, high quality environment with good service provisions. There is not a single new unit that is in a poor location. As planning consultants we identify and advise airports on how much concessions space they need and where it should be located to deliver maximum revenues. When compromises are necessary – and they always are, in airports – we would always rather take reduced square feet if it means the space we do have is in the best location relative to passenger flow, seating, bathrooms, and other services and amenities.”

Top engagement key to success
With a primary focus of optimizing the commercial potential of the main three concourses at DEN, while delivering an outstanding and distinctive customer experience, CPI worked primarily with DEN’s concessions team. But they were also engaged with the executive leadership team throughout.

“I cannot stress enough how important the commitment of the airport’s leadership has been to the success of this program,” says Gray. “It would have been very easy to stick with what they knew. But they recognized that they had a massive opportunity to not just improve the concessions and customer experience but create a program that is a benchmark in North American airports. And they are doing it.”

CPI was also plugged in directly to the airport’s planning and design team and their own project teams.

“Too many airports work in departmental silos; the DEN team provided the opportunity for CPI and the concessions team to engage directly with the architects and engineers designing the new expansions and we were able to have important and very respectful discussions that have had incredible results for DEN and their airline partners.”

Gray says that CPI has also been working intensively with the DEN team to make sure all the existing concessions spaces can be re-leased in a timely manner.

“The COVID pandemic slowed our plans, but the concessions team is now really confident it has a robust program and will be getting those opportunities in-market as soon as possible,” she concluded.

“From our perspective as a global commercial consulting firm, we’ve found that the airports who had the ability – or perhaps it was the courage – to stay their course during the recent COVID pandemic are the ones who are recovering faster. Airports such as DEN had the courage of their convictions; Penny May, Chief Commercial Officer and SVP Concessions Pamela Dechant, with the new CEO Phil Washington, were integral to the City of Denver’s decision to carry on with the major concourse development programs. This means the airport is so well positioned to leverage the return of passengers in record numbers and give them an experience they can be proud of.’’