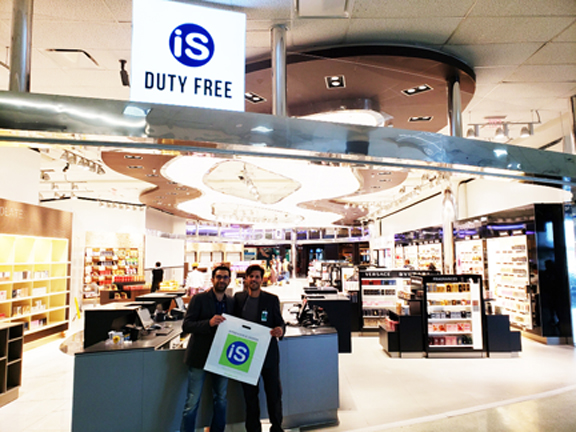 IS Vice Presidents Scott Halpern and Matt Greenbaum confirm to TMI that IS opened its first store in the airport this morning after taking over the concession at midnight from ATU Americas.

IS won the concession along with its MWBE partner, Shekinah Group. “We are delighted to be working with Vaughn and Marnie McKoy, the owners of Shekinah,” says Halpern.

The new concessionaires have retained all of the existing ATU Americas employees and are ramping up to bring in a full staff, says Halpern.

ATU Duty Free had originally entered into a 10-year contract with HAS [airport operator Houston Airport System] in 2015, but ended it early in an agreement with the City Council last year.

“Houston opens up a great door for us that was unexpected. We came in, bid intelligently, and we started today. We are operational,” says Halpern. “We opened up Terminal D today and will open up Terminals A and B over the next two weeks.”

IS will operate three stores in Terminal D – a 6,000 sqf main duty free store, a 350 sqf Chanel boutique, and 250 sqf Hershey boutique. The Hershey store will be transitioned into a MAC boutique in November, says Greenbaum.

IS will also open a 1,600 sqf duty free store in Terminal B as well as two duty free kiosks in Terminal A totaling approximately 200 sqf.

In another first for the company, IS will be competing against Dufry in Houston Terminal B, where both concessionaires are operating stores. Dufry also operates the duty free concession in Terminal E.

IS currently operates duty free stores in New York JFK, Boston Logan, Washington Dulles, Baltimore Thurgood Marshall, and Bradley International Airport in Hartford, all in the northeast United States. Houston is the ideal next airport and city and a “strategic move” for IS, says Halpern.

“There is a great familiarity for us with the airlines that are already flying here. So we feel that we know the consumer and saw the potential that was here. This was a great strategic move for us to test the waters. We know that we are going to do great here in Houston and to test the water outside the northeast,” he says.

IS took over the existing fixtures in the duty free store, but plans to completely renovate the stores in the near future.

“We understand the international passenger that is coming to or from the United States as well as anybody in the world. Every city and region has their own little nuances. This will give us the ability to understand the consumer behavior a little better and be able to make the best educated decisions for what brands we are going to go with. We want to maximize the revenues for the city of Houston and create the best atmosphere possible for the traveling public here in George Bush Intercontinental Airport,” says Halpern.

“I think we will probably live in this store for about six months to understand the consumer behavior and the way the airport operates. Then we will start to make our plan in the next 12-18 months, before we really do a deep dive and begin renovating.”

Halpern tells TMI that although the Houston stores are a strategic move for IS, the company has no plans to rush into other airports around the country.

“We as a family business want to be able to swallow what we chew. We want to come in here, make sure that HAS is extremely happy with the way we operate. We have a standard that everyone knows in Boston, New York, Hartford, Baltimore, and Dulles, we want to make sure that we acclimate to the way business is done here and then from there we will see what the next steps are, but one step at a time.”

In Houston, IS has plans to work with Texas spirits to ensure there is a local flavor.

“As we do everywhere we are working with the small batch spirits. It starts with Tito’s here in Texas. We have already partnered with a bunch of local Texas distilleries. It is really important for us that the consumer is able to find old faithful from around the globe, but also be able to bring Texas back with them.”