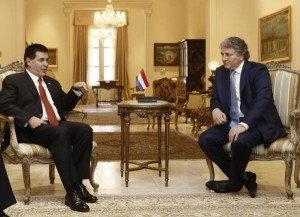 Simon Falic with the President of Paraguay

Simon Falic is leading a group of investors that intend to build a 5-star Hard Rock Hotel and Casino complex in the Paraguayan city of Ciudad del Este. Last month Falic met with Paraguayan President Horacio Cartes and Gustavo Leite, Minister of Trade and Industry to explain the details of the project.

“Construction should begin before the end of the year and we will do everything necessary for that to happen. There is still a lot of paperwork to be done, but progress is being made and I think the most important requirements have already been met. It will be a great tourist complex, with a casino, a 250 room hotel and ample parking space. This will be a project that will mark a before and after for the City of Ciudad del Este,” said Leite after the presentation.

The hotel complex will require an investment of $75m-80m. Building work could begin by the end of the year and is expected to take between 18-24 months.

The confirmation of the Hard Rock projects comes at an interesting time for Ciudad del Este. Last year the Capitalis Investment Group who hold the Sheraton franchise in Paraguay announced the building of a 4 Points hotel in the city as well as the construction of a World Trade Center business tower. Other development projects are expected to be announced shortly as well as a new urban master plan to redevelop the downtown area, designed by Brazilian architect Cassio Taniguchi.